Heavy downpours triggered landslides in three spots in Tarakan city of the province, but did not cause evacuation, Head of Emergency Unit of Provincial Disaster Management Agency Samto told Xinhua via phone from the city.

Rescuers immediately came to the scene for a search and rescue mission after the natural disaster, spokesman of National Search and Rescue Office Jusuf Latief said.

“All the 10 corpses have already been retrieved by our team and others,” Latief told Xinhua.

Soldiers, policemen, personnel of disaster management agency and volunteers have also been taking parts in the mission, according to him. 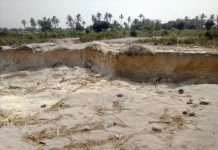