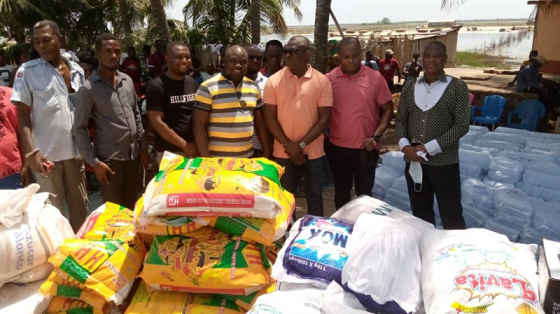 Mr Kwame Sowu, former Chairman of Ghana Museums and Monuments Board, has urged the residents of sea ravaged communities in Ketu South to remain determined as a lasting solution to their problem would be found.

He said the destruction the recurring tidal waves had caused to Agavedzi and Salakope communities and surrounding ones was devastating.

He said the communities needed a sea defence project to protect the coastal areas from such disasters in future.

Mr Sowu, who was speaking during a donation to the victims of the tidal wave at Salakope, said just as they heard their victims cry, the government also did and appealed to the people to be a little more patient for a permanent solution from the government.

“I’m a native of Tegbi and so, when we heard of the plight of our brothers and sisters at Agavedzi and Salakope communities, we came together to help. I want to plead with you to exercise patience some more. In the coming days, the Minister for Works and Housing will be visiting along with engineers from Accra to see the situation for himself.

The government is considering your situation. It may not be immediate but something is going to be done about this. Sea defence is a big time project and the government will do that but it will take some time,” the Founder and Managing Director of Energy Synergies Limited said.

Mr Richard Ahiagba, former Executive Director of Danquah Institute, said the tidal waves attacks kept recurring and that there was the need for a sea defence wall to give the people respite.

“In 2019, similar attacks happened but what we’ve come to meet today is serious and needs attention to make the place safe for our people to stay. Just as the Assemblymen for the areas have said, what we can do is lobby the government to act.

We’re picking up information that the government is making an effort and soon, work will be on the ground so our people can have peace of mind.”

Mr Elliot Edem Agbenorwu, Municipal Chief Executive for Ketu South, admitted “these are trying times for me” seeing the destruction the sea caused to the people, resulting in people aged 60, 70 and 80 losing their homes and life’s savings.

He said as a native of the area, he had been doing his best to ensure the government came to the rescue of citizens but for the bureaucracy and assured that phase II of the sea defence project would soon start to protect the coastal communities in the Municipality from the sea.