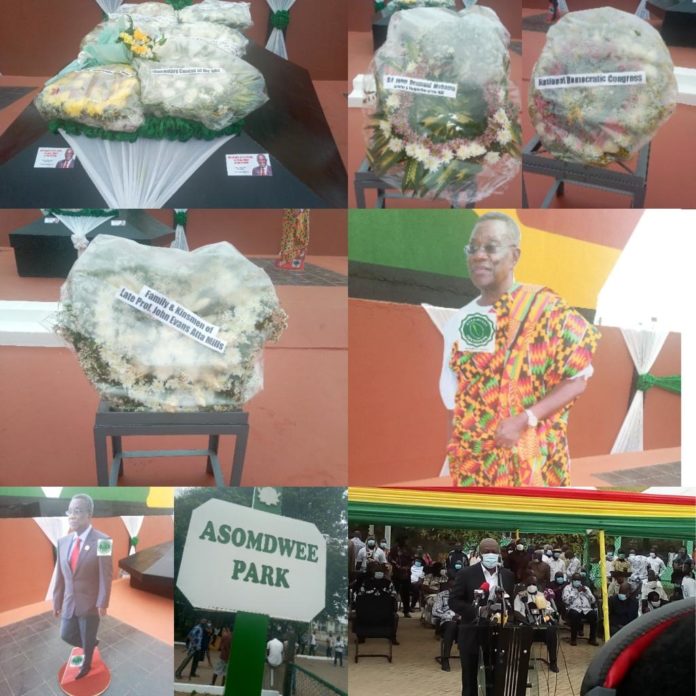 A wreath laying ceremony has been held in honour of late President Professor John Evans Atta Mills, who died eight years ago, at the Asomdwee Park in Accra.

Wreaths were laid on behalf of the President Akufo-Addo and Ghanaians, the National Democratic Congress (NDC), the Parliamentary Caucus of the NDC, former Presidents Jerry John Rawlings and John Dramani Mahama, the family, son and kinsmen of the late President and the Atta Mills Institute.

The ceremony was also adorned with words of prayer, eulogies, musical repertoire, and placards calling for peace and unity in honour of the Late Prof. Mills.

The Late Professor Mills, who was the third President of the 4th Republic of Ghana, died on July 24, 2012 at the 37 Military Hospital.

He was then given a state burial and laid to rest at the Asomdwee Park near the Osu Castle in Accra on August 10, 2012.

Mr John Dramani Mahama, also a flagbearer of the NDC, eulogized his former boss, saying, “I stand today before the tomb that holds the mortal remains of the Asomdwee Hene, the King of Peace and I pledge that I will continue his fight for the peace and unity of this country.

He remembered the ‘hot and slathering’ August afternoon on which the Professor was buried and said the day was remarkable as the late Maulvi Dr Abdul Wahab Adam, the former Ameer and Missionary in-charge of the Ahmadiyya Muslim Mission in Ghana, collapsed at the burial grounds and was rushed to the hospital.

“It is remarkable when this happened when we were laying to rest a man of peace, a man who saw everybody as one. Throughout his life, he did not see people as different. He saw all Ghanaians as one people. In opposition, he fought for peace, in power, he governed with peace. We called him Asomdwee Hene, which means the King of Peace. He left us a nation at peace with itself and united.

Mr Jerry Ahmed Shaib, Chief Executive of the Coastal Development Authority, who graced the celebration as a member of the delegation assigned by the President Akufo-Addo, said the Asomdwee Park would not just serve as a monument but an event centre, for the state to generate funds from it.

“People walk to the Kwame Nkrumah Mausoleum and pay to watch, so why can’t we do something like that for Professor Mills, who was a peace loving President?”

Mr Koku Anyidoho, Spokesperson of the late Prof. Mills and the current Chief Executive Officer of the Atta Mills Institute, said Prof. Mills had a vision, direction and dreams for Ghana, but unfortunately had to succumb to the calling of his maker.

He explained that the Atta Mills Institute was established to be used for civic education and public policy advocacy.

Mr Anyidoho said elections had become a ‘monster’ that was eating up the nation, and thereby making her people neglect the civic education aspect which was vital for growth and development.

He said the National Commission for Civic Education had been hidden in terms of their structural and functional grounds, even when it performed a critical role in promoting civic education.

The ceremony was also graced by the former Speaker of Parliament Mr Edward Doe Adjaho, Mr Samuel Ofosu Ampofo, National Chairman of the NDC, Mr Haruna Iddrisu, Minority Leader, and representatives of faith based organisations and other political parties.