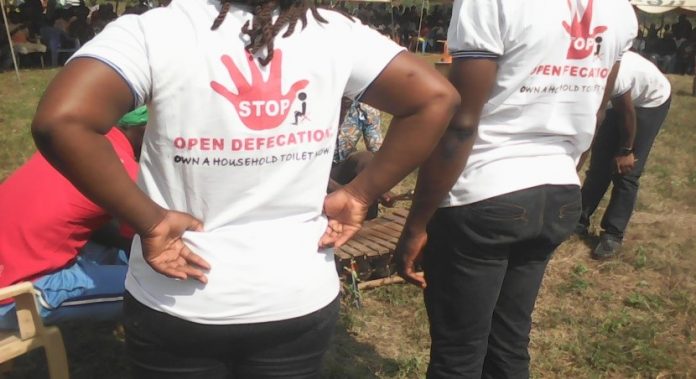 Six communities in the Lawra Municipality have failed to pass the Open Defecation Free (ODF) verification, which was conducted by the Upper West Regional Inter-Agency Coordinating Committee on Sanitation (RICCS).

The Lawra Municipal Environmental Health and Sanitation Department submitted the communities – Korikori, Zinkaar, Koro number one, Koro number two, Weho and Biro – to the RICCS for verification to be declared ODF under the Community Led Total Sanitation (CLTS) initiative.

However, all the six communities could not meet the requirements set by the government and development partners such as UNICEF which included: at least 80 per cent latrine coverage in the community, availability of hand washing facilities at the community; evidence of the community defecating in the toilets and availability of community by-laws on sanitation among others.

While the verification team spotted faeces in some of the communities, others did not meet the 80 per cent latrine coverage and did not have handwashing facilities available.

Mr Isaac Sunseo, an Independent Verifier, blamed the failure of the communities to meet the ODF requirements on poor leadership at the district level.

He said the authorities at the assembly did not comply with recommendation by the regional monitoring team, when the communities were visited before the ODF verification hence their failure to meet the requirement to qualify as ODF communities.

Mr Sunseo therefore urged the leaders at the district, including; the District Chief Executive (DCE) to be more committed to the ODF campaign in order to accelerate the achievement of a Municipal wide ODF agenda.

Mr Sanni Guri, an opinion leader at Koro number two, urged the Lawra District Assembly to enact sanitation by-laws to force the communities to comply with the CLTS campaign.

He said the District Assembly should also involve the police in the CLTS advocacy process because continuous pleading and diplomacy with the communities would not yield the needed results.

Mr Agambire Inusah Alhassan, the Monitoring and Evaluation Officer at the Upper West Regional Environmental Health and Sanitation Department, said the RICCS, would compel the Lawra Municipal Assembly to fund subsequent verification per the laid down principle in the ODF verification protocol.

According to the ODF protocol, any district or municipality that had less than 80 per cent of submitted communities for ODF verification passed would fund subsequent verification of its communities.

He said it was high time the assemblies prioritised sanitation issues and invested resources to improve Basic Rural Sanitation.