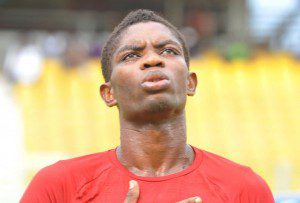 Lartey, 22, will sign a permanent deal with the Mother City outfit after passing a medical.

The highly-rated Ghanaian defender is a free agen after ending his contract with champions Ashantigold at the end of last season.

The former Nania FC strong centre-back refused contract extension at the club, paving the way for him to join the South African side.

The Urban Warriors have been tracking the Ghana defender for more than two years and it appears they finally have their man after he agreed in priniciple to sign for them.

Ghanaian-born defender Lawrence Lartey is finally set to join Ajax Cape Town. The 22-year-old has agreed to join the club. a Siya source is quoted as saying.

The defender will not be able to be registered by Ajax until the January transfer window opens if a deal is finalised, however the club can start setting the wheels in motion with regards to his work permits.

Lartey made the Ghanaian Premier League Team of the Season last year for his exploits in the league, and Ajax are hoping to add his talents to their side in the near future.