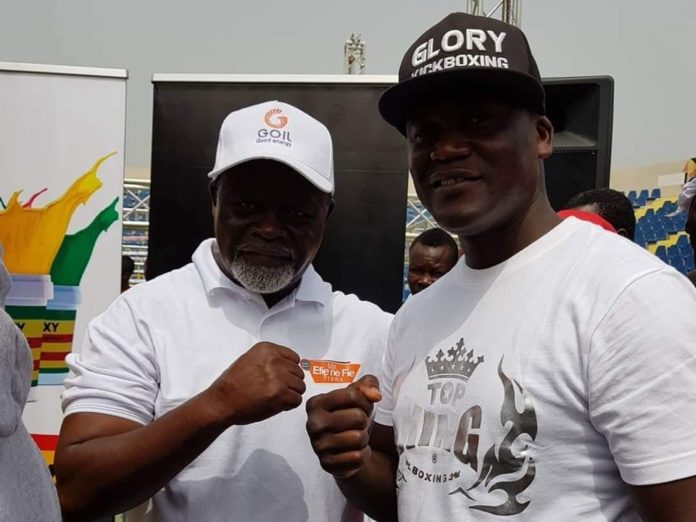 Lawrence Nyanyo Nmai, President and Head Coach of the Pro Fighting Factory based in Ghana and Switzerland who was recently granted a professional Boxing Coaching License by the British and Irish Boxing Authority (BIBA) has appealed to the government of Ghana to support boxers by investing more in the sport to encourage and motivate them.

The licensee who now has the opportunity to train boxers and undertak other ring activities at professional Boxing Tournaments said Ghana has talented and skillful fighters who should be inspired to come out and go to international competition.

Lawrence Nyanyo Nmai, arguably the pioneer of kickboxing in Ghana, the number 1 torch bearer of Ghana worldwide, the number one sponsor of Ghana kickboxing said it is not only boxing that Ghana has talent in, but the martial arts because Ghanaians are able to defeat people from China and other Asia countries.

The once the World Martial Arts Committee (WMAC) Muay Thai Light Heavyweight champion who has twice won the Sports Writers Association of Ghana (SWAG) Kickboxer of the Year in 2010 and 2016 said football has been swallowing all the sports budget, but some can go to boxing especially the amateur side and they can win more medals for the nation

He commended coach Dr. Asare and his assistants for their wonderful works and congratulated the two boxers who have qualified for the Tokyo 2020 Olympic Games.

He expressed that the amateur department need support before they can become worthy professionals like Prof. Azumah Nelson, Joseph Agbeko, Ike Bazooka Quartey and Joshua Clottey.

He also advised Isaac Dogboe, Emmanuel Tagoe and Richard Commey never to give up, but train harder to regain their title belts.

Lawrence Nmai urged rising stars like Wasiru Mohammed, Manyo Plange and Duke Micah to be very disciplined than ever to reach the top of boxing.
He was very sad on the demise of young rising amateur star, John Commey as he has plans to support him.
He also advised members of the Pro Fighting Factory Gym in Ghana and Switzerland also to train hard and promote Muay Thai in Ghana and Africa.

Mahama urges Government to dialogue with bondholders on Debt Restructuring