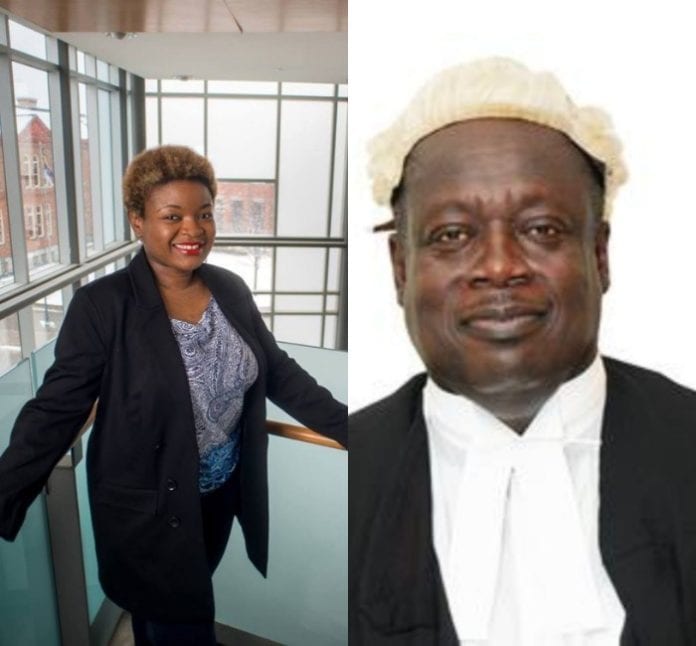 Social Media eagerly awaits the outing of a rapist, apparently said to be a prominent Ghanaian living in the USA and others in what appears to be a #MeToo episode in Ghana.

Kuukuwa Andam, Ghanaian intellectual, lawyer, out of closet full blown lesbian, PhD candidate and daughter of the late Prof Andam former superstar Vice-chancellor of the prestigious Kwame Nkrumah University of Science and technology narrates a horrible story with gory details of being raped in a Washington DC hotel room while having an illicit affair with a married man.

She shocked facebookers, friends and her fans with a “Turkey-Khashoggi-style” suspense-filled exposé, all await Monday the 14th of January to get a name and face to the rapist.

Below is the narration of the horrible alleged rape incident as posted on her facebook:

*Trigger Warning for Rape
************************
Yesterday, I filed a criminal complaint with the Washington Police Department against the current President of the Ghana Bar Association for a rape that occurred in the US in December 2012. The investigation is pending & if the case is cleared, charges will be filed against him.

I want to be clear just as I stated in my post on Selasi that I DO NOT want or need a pesewa from Tony. I have my own money now including savings. Not to boast but I teach several courses at a top notch university in Canada & just finished managing a major research project. I am a published author & I am regularly invited to participate in paid speaking opportunities due to my activist work. So this is not about money. This is about justice & trying to ensure that the next generation of Gh. female lawyers will never suffer the way that I have suffered.

I met Tony at the last Ghana Bar Association event I attended before traveling to study for my masters at Cornell University. This was almost a year after being raped by Selasi & my heart had hardened. After my bitter experience, I had decided that most married male lawyers in Ghana were going to take advantage of you anyway so it was better to just date them for money. At that time, I needed money for Cornell as my funding only covered my tuition. So when Tony told me he wanted to date me, I agreed. He would send me many messages telling me he loved me. I used to call him ‘T-baby.’ He knows all these things & can admit them if only he will be honest.

We never had actual sex in Ghana although we were physically intimate (would kiss & touch & do other stuff) and then I left for Cornell. I did any job I could find in Cornell just to survive. I asked a relative for rent & he told me if he gave me the money I wouldn’t pay back. That was the day I realized I was on my own. I worked as a cook in a cafeteria & would stand for hours. I worked as a cleaner. I would be so tired I would sleep during lectures. Eventually, I decided to contact Tony for money.

He told me to meet him at a hotel in Washington DC for the rent money. It was close to school exams but I went anyway. Remember that at this time we hadn’t actually had sex but I told myself that I would just close my eyes & do it with a condom (because I knew he was sleeping with many women) & then at least I wouldn’t have to drop out of school. He told me he would arrange transportaion for me.

I lost my laptop in the taxi & arrived at the hotel crying my eyes out. All my lecture notes were on that laptop and losing it meant I would fail the exams. Tony didn’t care. By this time, I knew the drill with dating married men. I knew that they claimed to love you but of course they didn’t. You were just a piece of meat so I wasn’t shocked at his reaction.

As soon as I settled in, he asked for sex. I had already psyched myself up and so I asked him whether he had a condom. When he said no, I pleaded with him to allow me to at least go get a condom but he pinned me down & raped me. I still remember how it felt to be forcefully penetrated by him. How I felt as if I had left my body & was watching everything happening form the ceiling. I have heard from other rape survivors that this is a common occurrence. At one point I began to wince from pain because I wasn’t ready & he had forced himself on me but that didn’t stop him. Not even the tears that began to fall out of the cornes of my eyes stopped him. Then it was over. And I felt so broken and dirty and ashamed. But it got worse.

After raping me, he refused to talk to me. It was as if he had been filled with some new hatred for me. He told me with disdain that I could take the $400 on the table if I wanted. I almost went mad. I couldn’t believe that he had forced himself on me & was not even talking to me. And the money he had given me was even less than the price of the laptop I had lost just to see him. So I had been raped & ended up in debt too. I began to cry my eyes out & text a friend of mine about what had happened. God bless you dear friend she knows herself. She advised me to quickly return to Cornell and that she would help me through this. I booked a bus & left & he didn’t care what happened to me either way.

As soon as I arrived in my room at the University, I cut off all my hair with a piece of scissors & threw away my nice clothes. I was so tired of being raped & mistreated by men & I wanted to be ugly so that no man would even want to have sex with me again or rape me again. I swallowed several sleeping pills that I had been prescribed by a therapist I had been seeing to deal with the other rape I had suffered previously. Then I called an African professor who was like a father to all of us African students at Cornell to tell him that I had overdosed on sleeping pills and he contacted the Deputy Dean of Cornell Law and some hospital staff to assist me.

For the next few weeks, I would be hospitalized in a mental ward as I broke down. This also began my struggle with binge eating because I would just binge on food anytime memories of my rape by Tony & Selasi came up. I put on so much weight & developed health related problems because of it. I could not write my exams that term & when I eventually did, I got very poor results due to all this trauma. I was put on anti-depressants which I had to swallow for years because of what Tony did to me. 4 years later in 2016, I would attempt to commit suicide again this time at Queen’s University because I still could not get over what Tony did to me.

And yet I continued to be nice to him. I was terrified of losing my visa if I could not pay for my upkeep & he was my only hope. How would I survive winter in the US without an apartment & on the streets? When he contacted me after I was in the mental ward, I just told him I was sick but didn’t tell him why. We both pretended that he had not raped me & never spoke about it. I had to keep the act up so I wouldn’t offend him.. Soon, he said he was coming to Boston in 2013 & I should meet him & I told him I would and even acted like I was excited. But that was the last time I would communicate with him. I just couldn’t bring myself to contact him again after that because of what he had done to me.

I decided not to talk to him for the rest of my life although he would frequently send messages through some other lawyers to me. Seeing him in the news hurt especially when he was appointed as President of the Ghana Bar Association. I could not believe he had ruined my life in this way & now I was forced to see his name/ face in newsletters that were circulated to all Ghanaian lawyers.That also sent me into depression for months.

A few days ago, I sent him a message to tell him how much he had hurt me. That he & I both know he raped me. But the same person who had been chasing me to talk to him now refused to even acknowledge receipt of my email. All I wanted was for him to say sorry & assure me that he would never do this agin to someone’s daughter again but he did not do this. I forgive him But I have to speak my truth & pursue justice for the sake of younger female lawyers who will come up. I owe them a duty to make sure they never go through even half of the pain I have gone through. What Tony did to me changed my spirit forever. I used to be called ‘cute’ & ‘bubbly.’ I became sad, depressed & cynical. I can’t even sleep through a complete night anymore. He stole my life & this is not ok.

“Meanwhile thanks for the advice that has come in about putting my 3 rapists on blast. I’ve not made a decision but you’ll all find out on Monday by 9 pm GMT (6 pm EST) what decision I made? of course, based on whether they apologize & show actual concrete remorse & change. For those worried about my safety & reputation, I’ll take that into consideration also.

What you guys don’t understand is that when I tried to commit suicide TWICE by swallowing pills, I actually died. Yeah. That part of me that used to be afraid died. This is why I came out as a member of the LGBT community soon afterward & have been speaking my mind ever since. I’ve lost fear & shame lol. I simply don’t care”

Nobody is prohibited from discussing coup d’etats in Ghana – lawyer