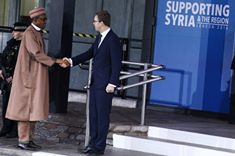 The gathering comes as Staffan de Mistura, the U.N.’s Special Envoy for Syria, said late Wednesday that there would be a “temporary pause” in the indirect peace talks between Syria’s government and opposition leaders. President Muhammadu Buhari arrived London from France on Wednesday to be part of the conference.

The $9 billion is the amount the United Nations says is needed for economic and educational assistance for the 4.6 million Syrians who have fled to Jordan, Lebanonand other neighboring countries as the conflict in Syria approaches its fifth year. The funds are also needed to help stem the influx of Syrians trying to reach Europe.