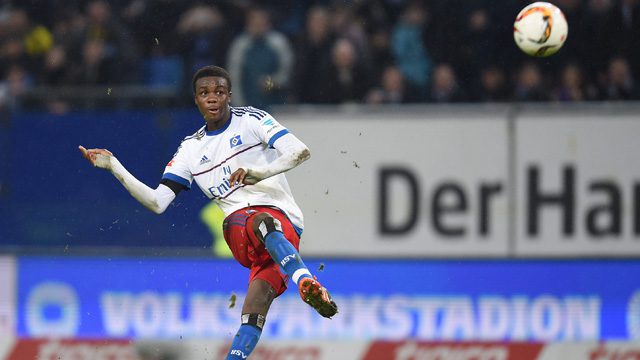 Gideon Jung has been impressive for Hamburg SV

Ghanaian youth sensation has revealed he was sad whenever he was left out of the Hamburg SV squad for Bundesliga games.

The prodigious 21-year-old has six (6) Bundesliga games under his belt this season and has featured prominently in the Dinosaurs’ last two games in the top-flight.

Manager Bruno Labbadia came under criticism from Hamburg fans for occasionally leaving out the gifted defensive midfielder from his squad but the German gaffer has restored him to his side and used him in his famous wins against Borussia Dortmund and Werder Bremen.

Jung, born to Ghanaian parents in Germany, has revealed he was sad whenever he was left out of the Hamburg squad for games.

“Of course one is sad when one learns on Friday night that one is not in the squad. But at the same time, I then looked forward always right to be able to play at the U23 the next day and develop myself,” he told Hamburg’s official website.

Jung was voted MVP in Hamburg’s 3-1 win at Bremen last weekend and has been maintained in their squad for their home game against Mainz 05 on Saturday afternoon.

Hamburg recruited Jung from German third-tier side Rot-Weiss Oberhausen in 2014.

He has turned down an opportunity to represent Germany at U21 level.