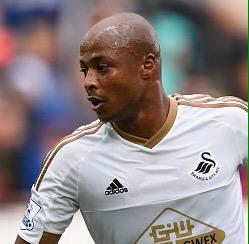 English Premier League side Leicester City have joined Sunderland, West Ham and Chelsea in the race for Andre Ayew.

According to a report by L’Equipe, Leicester City have joined the race to sign Swansea City’s Andre Ayew but face competition from a number of Premier League rivals.

The French publication list Sunderland, West Ham and Chelsea as keen suitors, while also mentioning that Leicester plus one of the Manchester clubs has joined the interested parties.

“Other exclusive clubs interested in Ayew are Leicester and one of the two Manchester clubs. Will they take action before the end of the winter transfer window? Nothing is certain,” the report reads.

Ayew only joined the Swans last summer on a free transfer, yet his impressive performances coupled with the Welsh side’s struggles has prompted speculation over his future.

The Mirror reports on Sunday that the forward wants to leave the club and has his eyes on a move to a club further up the table, opening the door to a potential switch to a fellow Premier League rival.

Sunderland are said to have already had an approach turned down, as reported in a separate piece by the Mirror, yet the Black Cats remain interested and are likely to go back in for his signature.

Leicester do have plenty of striker options already, yet Ayew’s impressive seven-goal haul this season has caught the eye and the Foxes could see him as an ideal recruit this month.

Claudio Ranieri’s men have a top four spot firmly in their sights, and bringing in a quality addition or two could get them over the line in terms of qualification for next season’s Champions League.