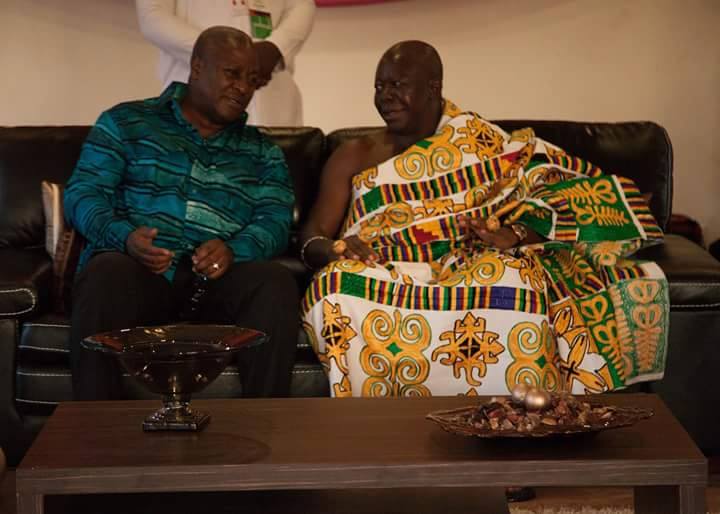 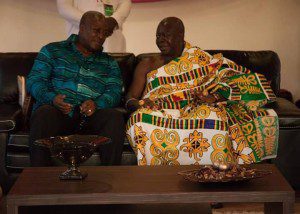 According to the overlord of Asante, government’s decision to sign up for a bailout from the International Monitory Fund (IMF) should be explained to Ghanaians because it has a direct effect on the life of the ordinary Ghanaian.

“When explanations are made, Ghanaians will understand the need to endure short-term hardships with the hope of relief in the long term,” he said.

Otumfuo Osei Tutu II made the remarks when President John Dramani Mahama called on him on Wednesday June 29 at his Manhyia Palace on the second day of his Accounting to the People tour in the Ashanti Region.

“With the IMF bailout, you need to be silent on some of the arrangements, but there is the need to explain some of the agreement to Ghanaians, for example, over why utility tariffs have gone up, and that if there is no short-term hardship, we may not be able to meet certain conditionalities to make the programme a success. Explain to Ghanaians to understand the situation as you continue on your tour,” he stated.

The Asantehene also said his doors were open to any political leader that needed his advice and urged political parties to maintain the peace before, during, and after the elections.

“You have promised, just as Nana Akufo-Addo has, that if there will be violence, it will not come from your camp. We are yet to meet the other parties as well. What we are telling the political parties is, during your campaigns and rally, tell the electorate what you can do for them to bring development and progress to the country. Campaigns are not about insults or quarrels. Ghanaians want progress and development. My message to all political parties is that the peace of the country is paramount to the Asantehene. … If we have all agreed to go the way of democracy, then let us unite to abide by the rules that govern democratic states. If we realise there is one Ghana, we will all contribute to help maintain the peace and develop the nation,” he said.

“I am available to offer advice to you anytime you call on me, just as I did during the time of former President Rawlings, Kufuor, and Atta Mills for the development of the nation.”

President Mahama expressed gratitude to the Asantehene for intervening to make the IMF deal a success for Ghana. He said the deal would have been unsuccessful had Otumfuo not been involved.