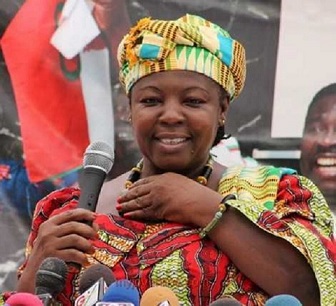 Mrs Nana Frimpomaa Akosua Sarpong Kumankumah, Chairperson of the Convention People’s Party (CPP), has charged Ghanaian leaders to be committed to nation building in every sphere they find themselves in.

She said every leadership position one occupied in the country had the potential in contributing to nation building, adding that, “each and every one of us should identify ourselves as a Nkrumah who is committed to nation building in our dealings”.

The CPP Chair made these remarks on the side-line of an event to commemorate the birthday of Dr Kwame Nkrumah, Ghana’s first President.

The event organised by the CPP was on the theme “Relevance of Nkrumahism in Addressing the Socio-Economic Challenges of Today”.

Mrs Sarpong Kumankumah said leaders needed to reignite the spirit and zeal of selfless leadership towards the country’s socio-economic development.

She said the ideals of the former President dubbed ‘Nkrumahism’ can only be materialised by the CPP, and not any other political party, not even those professing to be ideologically aligned to them.

She said they were committed to providing selfless leadership to meet the challenges of today, especially economic challenges and youth unemployment.

The CPP Chairperson reiterated that they were the only option to mitigate today’s socio-economic and development challenges as they did in Ghana’s first republic, from 1960 to 1966.

Professor Joshua Alabi, a leading member of the National Democratic Congress (NDC), said they would support the CPP in uplifting the ideals of Nkrumah.

He said the NDC acknowledged the invaluable role the former President played in Ghana’s independence struggle.

Prof. Alabi said the CPP needed to reposition itself to remain relevant and be a force to reckon with in the country’s contemporary political space.

He said the current economic challenges pointed to the need for the ideals of Nkrumahism in meeting today’s national development needs.

The Nkrumahism ideals includes leadership of selflessness, unity and togetherness, and patriotism.