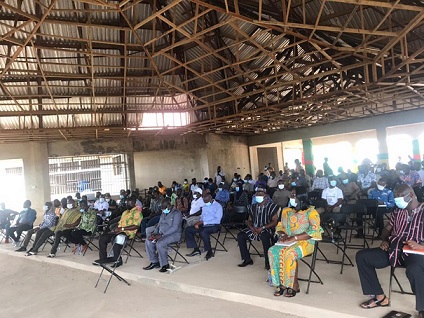 The Central Regional Coordination Council (CRCC) has charged workers of Metropolitan, Municipal and District Assemblies to ensure a high sense of professionalism and discipline in the discharge of their duties.

Mr Kingsley Adjei Boahen, Regional Coordinating Director of CRCC, made the call when he addressed workers of the Upper Denkyira East and West Assemblies on ending illegal mining in the Region.

He urged the staff to accept challenging tasks at the workplace and equip themselves appropriately for the demands of their profession.

The Regional Director called for team work and support for the administration to transform the Region into an economic giant.

On the environment, Mr Boahen urged the workers to take responsibility and advise the youth involved in the illegal activity and to explain the effect of the menace on the nation and human life.

Mrs Justina Marigold Assan, the Regional Minister, commended the workers for the support in implementing policies and accomplishing visions for the country.

She said the RCC was set to develop a Regional Development Strategy to facilitate speedy development.

Mrs Assan said her vision was targeted at improving the lives, maintaining peace, and moving the Region forward to boost the standard of living of the people.

She called on all stakeholders to come together and support the fight against illegal mining to save and protect water bodies and forest reserves.

The Regional Minister said illegal mining was a national canker and the RCC was ready to put all efforts and measures in place to end the menace.

The RCC, she noted, would soon deploy a task force to support military men already working tirelessly on the grounds.

“It is serious to see foreigners come to our country, destroy our water bodies and forests and take away our God-given gifts and blessings,” she stressed.

Mrs Assan advised the youth involved in the illegal activity to stop and explained the effect of the menace on the nation and humanity as a whole.