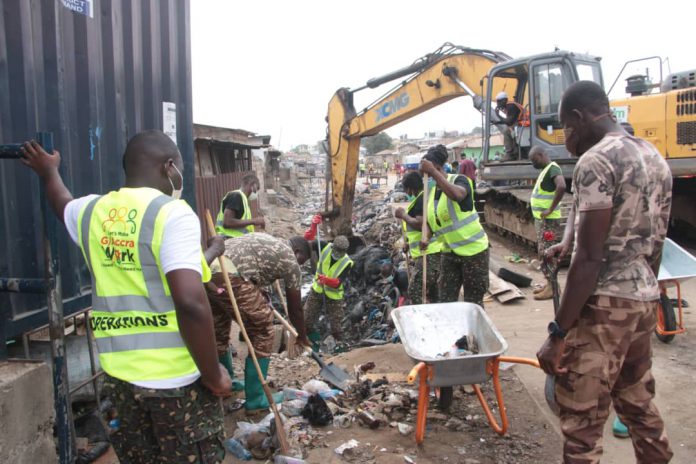 The Let’s Make Accra Work’ campaign launched recently by the Greater Accra Regional Minister, Mr Henry Quartey, has kick-started with a massive clean-up exercise.
The clean-up operation, undertaken simultaneously in four constituencies—Ayawaso Central, North, East and West-Wuogon—came off yesterday (Thursday, April 22, 2021).
It involved personnel of the Ghana Army, Ghana Police Service, Ghana Prisons Service (GPS) and Ghana Immigration Service (GIS).
The rest were from the National Disaster Management Organisation (NADMO), Narcotics Control Board (NACOB), Ghana National Fire Service (GNFS) and workers of waste management company, Zoomlion Ghana Limited.
The exercise took off at exactly 6:00 a.m., from Kawukudi in the Ayawaso Central, where military and police personnel together with Zoomlion workers desilted choked gutters and swept the shoulders of the streets in the area.
From Kawukudi, the clean-up team moved to Paloma (also in the same municipality) to ensure that gutters in this area were cleared of any blockade(s) to allow water flow freely.
Speaking to the press, the brainchild of the ‘Let’s Make Accra Work’ initiative, the Greater Accra Regional Minister, Mr Henry Quartey, was full of praise for the various security agencies that took part in the exercise.
However, he warned that the assemblies will not hesitate in imposing heavy fines of citizens who have cultivated the hardened habit of dumping refuse into the gutters and drains.
He admitted that the fight to make the national capital clean was a herculean task. But, he assured: I’ll work with iron fist to make sure Accra works again.”
According to Mr Quartey, who is also the Member of Parliament (MP) for Ayawaso Central, the assemblies had deployed loads of people to participate in the exercise.
On that note, he disclosed that over 850 personnel have been assigned to clean the city on a daily basis.
This move, he indicated, was to prevent a recurrence of the June 3rd disaster.
The regional minister therefore thanked President Nana Addo Dankwa Akufo-Addo for reposing confidence in him to steer affairs of the Greater Accra Region.
“I also commend every person who participated to ensure the success of this clean-up exercise, adding that we will be embarking on this exercise every two weeks,” he said.
The Local Government and Rural Development Minister, Mr Dan Kwaku Botwe, who was also present, affirmed his support for the project, assuring that it will not be a flash in the pan.
According to him, his ministry will support with engineers to see to it that the clean Accra project is successful and inures to the benefit of the citizenry.
For his part, the Greater Accra Regional NADMO Director, Mr Archbold Cobbinah, applauded the efforts of the regional minister to help clean Accra
According to him, NADMO was also working hard to make sure all the gutters in the city were cleared, especially in flood-prone areas.