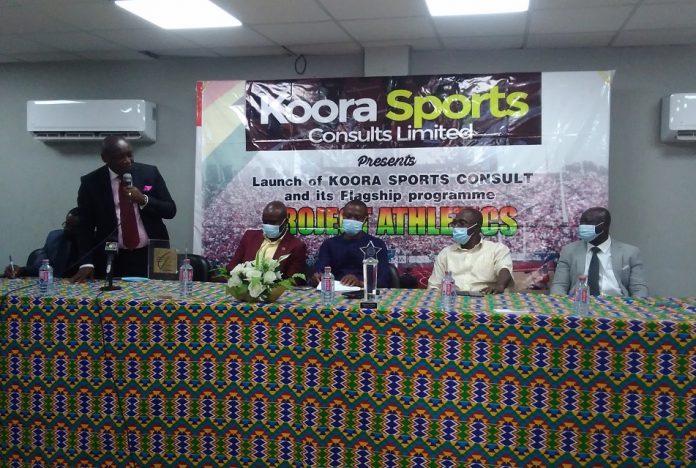 Mr. Kwabena Agyepong, a Civil Engineer and Politician with the New Patriotic Party (NPP) has called for support for the youth in Ghana with athletic potentials.

The former Sports Presenter of ‘Sports Highlight’ who was speaking as chairman at the launch of the the Koraa Sports Consults Ltd. founded by former national athlete and three times Olympian, Emmanuel Tuffour at the Media Centre of the Accra Sports Stadium on Tuesday, June 22, 2021 expressed that track and field can be good for Ghana, and the youth with potentials should be encouraged.

He said Ghana’s image in athletics must be restored, whilst opportunity must be given to the youth to display their talents in athletics.

He recalled the successes Ghana chalked in athletics at international meets, and the exploits of Mike Ahey, Alice Annum, Rose Hart, Oko Addy, Billy Lomotey and others.

“We need to prepare well for 2023 African Games and the 2024 Olympic Games, and revive schools and colleges sports” he expressed.

He said his secret is training and discipline, and his dream is to build a sports complex of excellence in the Ashanti Region to train young sports men and women who can represent the nation at international events, like the Olympic Games, World Championship and African Games.

He called for reward of scholarships for athletes, the return of inter schools and colleges and the support of corporate Ghana.

Ghana Gas, Adonko Bitters, Ashfoam, Yazz, ADB, Goil, GNPC, Franko, NIB and others are supporting the initiative towards raising athletes for the 2023 African Games to be hosted in Ghana and beyond.

The dignitaries present include President of the Ghana Olympic Committee, Mr. Ben Nunoo Mensah who said the GOC is solidly behind Koora.

President of SWAG, Mr. Kwabena Yeboah, said the state of Ghana should make imput in the project.

Chairman of the LOC for the 2023 African Games, Dr. Kwaku Ofosu Asare urged Ghanaians to support the Koora Sports Consult project and assure that the African Games would definitely be held in Ghana in 2023, and serve as qualifier for the 2024 Paris Olympic Games.

Professor Peter Twumasi, Director General of the National Sports Authority (NSA) noted that it was an exciting day, and prayed that the dream of Koora will come true.