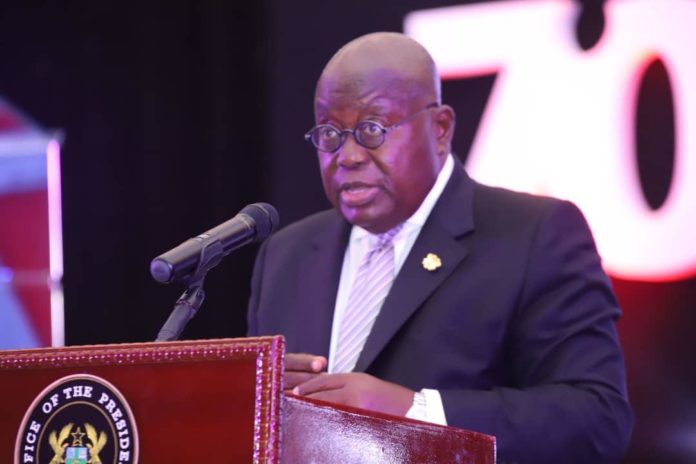 President Nana Addo Dankwa Akufo-Addo has urged the faiths not to turn schools into places of fighting ideological and religious battles.

Rather, all stakeholders must work to preserve the enviable inter-religious coexistence to sustain the peace and social cohesion of the nation.

The President was addressing Muslim faithful at the forecourt of the Ghana Broadcasting Corporation, in Accra, when he joined them to mark this year’s celebration of the Eid-Ul-Fitr, the religious holiday celebrated worldwide, to observe the end of the month-long fasting of Ramadan.

President Akufo-Addo’s remarks are in response to impasse between the Muslim Community and the Methodist Church, Ghana, regarding the school authorities of Wesley Girls’ High School disallowing a Muslim student to fast during the month of Ramadan.

The school authorities, however, stated that the ‘no fasting’ policy, instituted in the 1990s was non discriminatory, and intended to prevent the recurrence of a situation, involving some Christian students who became very ill after a fast.

President Akufo-Addo stated a satisfactory solution was being found to put the issues to rest.

However, he pointed out that boarding schools had traditionally served as training grounds in learning about religious tolerance and losing the fear of the unknown.

“These schools must necessarily have rules and regulations that enable them to function…throughout the years, the schools, by large, managed to find a reasonable balanced atmosphere to enable our young people to flourish and this has served us well.”

The President also pointed out that the schools had evolved and adapted their practices to suit the times, saying, “I would urge that we do not turn them into the places to fight ideological and religious battles.”

“Young people deserve a peaceful atmosphere to be able to deal with the many challenges of studying and acquiring knowledge, and parents certainly must have a keen interest in the schools into whose care they entrust their children. May I plead with all of us that we keep the tolerance that has served us so well in matters of religion.”

President Akufo-Addo said though the Constitution guaranteed the freedom of worship for all citizens, religious tolerance in Ghana, which had been the envy of many nations, did not emerge from formal law, but from the Ghanaian’s respect for each other’s belief systems.

He said the beautiful spectacle of the religious communities co-existing peacefully should not be taken for granted, and urged citizens to strive to maintain the envious culture of religious tolerance to foster unity, progress and development of the nation.

The President gave the assurance that his government would build an all-inclusive society that created opportunities for Ghanaians, irrespective of their circumstances.

“And we shall not relent until we even the development equation between Zongo communities and other communities of our country,” he stated.