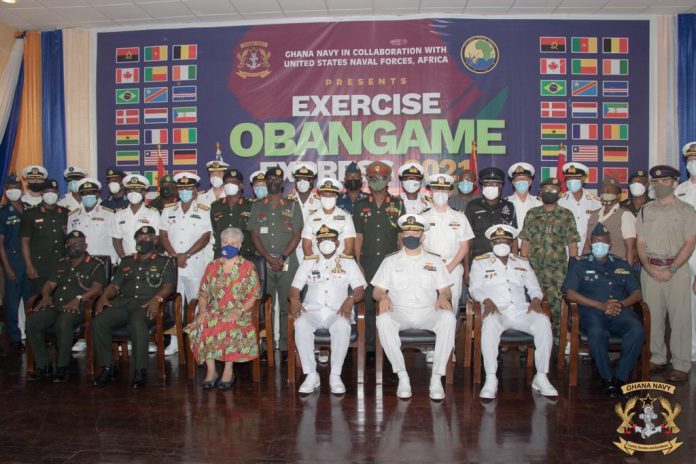 Vice Admiral Seth Amoama, the Chief of the Defence Staff (CDS), has charged the Ghana Navy and its counterparts across the sub-region to cooperate and share information to address crime and insecurity in the Gulf of Guinea.

Speaking at the closing ceremony of Obangame Express 2021 (OE21) exercise in Accra on Saturday, the CDS said the number of vessels operating in the Gulf of Guinea had increased in recent times, with a corresponding increase in maritime incidents.

Vice Admiral Amoama said regulatory and law enforcement agencies were under pressure to mitigate those problems, which included illegal, unreported and unregulated fishing, piracy and armed robbery, human and drug trafficking, as well as transport of illegal goods at sea.

He said such crimes could not be addressed by any single nation and encouraged interoperability and cooperation among maritime stakeholders and effective maritime information sharing to curb the menace.

“Indeed, these are complex transnational crimes, which cannot be addressed by any single nation alone,” he said, adding that: “For those of us in the sub-region, therefore, our concern is not only preventing the threats in the Gulf of Guinea but rather empowering our law enforcement agencies by equipping them with the requisite capacity and capabilities to effectively deal with the threats.”

Vice Admiral Amoama commended the US Africa Command (AFRICOM) for its continuous assistance to improving maritime security in the sub region.

He said states along the Gulf of Guinea and their international partners remained committed to fighting maritime crime and insecurity, despite challenges posed by the COVID-19 pandemic.

Rear Admiral Issah Yakubu, the Chief of the Naval Staff (CNS), said the exercise had improved the operational capabilities of stakeholders such as the standardisation of skills and communications among the Navy, Air Forces and partners.

He, however, said exercise had also exposed the limitations in the country’s surveillance capability and that the Navy would engage relevant stakeholders to address such shortfalls to improve operations.

Ms Stephanie Sullivan, the US Ambassador to Ghana, said the exercise would improve regional cooperation and information sharing among participating nations, to counter sea-based illicit maritime activities and strengthen safety and security in the Gulf of Guinea.

She tasked the Navy to continue to use the experiences, networks and skills gathered to fight maritime challenges to ensure peace, safety and stability in the region.

The Ambassador commended participants for ensuring the success of the exercise amid the COVID-19 pandemic.

The OE21, organised under the auspices of the AFRICOM, is one of three U.S. Naval Forces Africa-facilitated regional exercises.

It formed part of a comprehensive strategy by the US Naval Forces Sixth Fleet and AFRICOM to provide collaborative opportunities for African forces and international partners to address maritime security concerns.