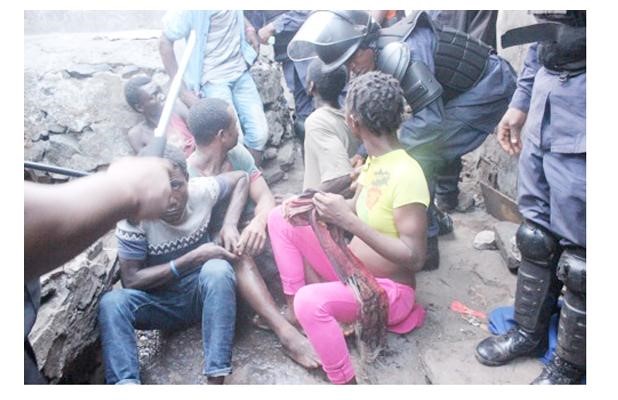 The Liberian society is engulfed with plethora of vexing social perplexities due to numerous of factors. Overtime, holistic and systematic steps have not been taken to address these prevailing challenges.

The proliferation of ‘Zogos’ is just one of those social challenges currently facing Liberia. This revolving social problem continues to endanger public safety and security since peace returned to Liberia in 2003.

The nation has been severely hit by this social dilemma. The alarming nature of the Zogos’ crisis is something that continues to create public fear and panic. Zogos (street thugs) are almost everywhere harassing and distressing peaceful civilians. As a result, the Liberia National Police (LNP) has declared another war against Zogos, but how far this war will go is a question to ponder over. This article tends to identify the causes for the proliferation of Zogos and advance possible remedies or recommendations to addressing this complicated situation.
In the Liberian context, Zogos are wayward citizens, mainly youth, who are involved with street crimes such as theft, physical attack and harassment of pedestrians. They are mostly found in ghettos, cemeteries, markets, unfinished buildings, liquor shops and on street corners. The main sources of income for Zogos are thievery, car loading and begging. The continuous abuse of drugs and other addictive substances is affecting them (Zogos) even more. Generally, they are seen and considered as street criminals and thugs in Liberia.

For almost 3 weeks now, the Liberia National Police under the command of Police Director Gregory Coleman has been vigorously hunting ‘Zogos’ and clearing them of the streets of Monrovia and its environs. This operation is contributing to reducing street crimes such as theft, harassment and physical attack. It is also contributing to the free and safe movement of pedestrians, especially during night hours.

At least for once around 10:00 PM this gone Friday, I was able to walk through Red Light freely without my laptop and gadgets being forcibly snatched away by Zogos. Besides me, many others have testified that the step taken so far by the Liberia National Police to chase zogos out of the streets is laudable. Yes indeed, it is, but it must go just beyond this stage.
The Liberia National Police (LNP) deserves a pat for chasing Zogos (street criminals and hooligans) out of the street, but must this war against Zogos be only about arresting and imprisoning them? Emphatically no!!

Before going any further, I want to make my position crystal clear that I do not support the ‘arrest and imprisonment’ of zogos, but I support the ‘arrest and rehabilitation’ of zogos through psychosocial support, vocational education, business loan, etc. I disagree with the imprisonment of Zogos, because there must be a probable cause to imprison someone. Moreover, our correction facilities are poor and overcrowded. LNP cannot imprison zogos when they have committed no criminal offence(s). Even though I support the action of the LNP to guarantee personal and public safety by pursuing zogos, but it (LNP) must cautiously observe the rights of zogos as well.

By even chasing them out of the streets means that we are sending them back in the communities to terrorize peaceful citizens, which is also detrimental. The communities are at risk whenever zogos retreat from the streets in an attempt to escape police arrest. This is why the war against zogos must go beyond this level to find a more concrete and sustainable solution to transforming Zogos into Craftsmen. The war must go beyond arresting and jailing. We cannot totally outcast or expel zogos, because they are products of our society and citizens of our country.

It is disappointing that the Social Welfare component of the Ministry of Health is totally dead even though resources are allotted in the national budget on an annual basis to cater for the social needs of citizens. Furthermore, the Social Protection arm of the Ministry of Gender is rarely effective though millions of dollars have been spent. The Ministry of Youth & Sports has done very little to address mounting social and economic challenges confronting young people. Concrete action through sustainable social welfare programs can put an end to the ongoing nightmare facing Liberian youth.

Zogos were produced as a result of a weak social welfare system in Liberia – a system that careless about promoting social welfare and public wellbeing – a system that once put guns in the hands of young people to create mayhem and bedlam – a system that has refused to crackdown on the mass importation of drugs. Our society must not run away from what it has produced; instead it must find genuine remedy to these bad products (Zogos).

The thousands of Zogos across Liberia that are currently threatening public safety and security were produced as a result of the following:
1. The proliferation of ghettos and liquor shops (drug and alcohol abuse)
2. The fifteen years of civil crisis (ex-combatants)
3. Weak social welfare system and mechanism (social neglect)
4. The alarming rate of youth unemployment (poverty)
5. Lack of access to education (technical and vocational)
6. Bad governance (corruption, inequality, weak policies, poor enforcement of the law, etc.)
7. Lack of empowerment programs (business loan, aid and grant) to promote youth development and capacity-building
8. Peer pressure, poor parenting, low household income, and high cost of living

These are 8 basic factors or forces that I have identified as major causes responsible for the mass manufacturing of Zogos in Liberia. Our society has hugely contributed to making them (Zogos) who they are today. I hope we have not forgotten that a good portion of them are former child soldiers and ex-combatants who are still experiencing post-war trauma and neglect.
Over 84,000 ex-combatants of various warring factions who fought between 1989 and 2003 remain an integral part of our society since August 2003. They have not really gone through a proper process of rehabilitation and reintegration. How is it possible to rehabilitate over 84,000 ex-combatants who fought war for 15 years in less than 6 months? Youth unemployment in Liberia is as high as 85 percent according to the United Nations. The number of youth with the required skills to work is low.

These are prevailing social problems that require a holistic, realistic and systematic approach in deriving long-lasting solution. The fact of the matter is that Zogos are products or proceeds of bad governance, system failure and a dysfunctional society. We must never ignore these realities and tend to dodge them. We must not hide from our shadow.

Hence, I recommend the following to the Government of Liberia and its partners:
1. That an anti-Zogo taskforce or committee be setup to develop a concrete and comprehensive roadmap or strategy geared towards making Liberia Zogo-free;
2. That all ghettos across the country be shutdown. The Bureau of Immigration and Naturalization (BIN) needs to tighten its screws on the mass importation and distribution of drugs and addictive substances;
3. That the Drug Enforcement Agency be empowered through increased budgetary allotment, and laws on drug abuse be reviewed and strengthened;
4. That an anti-drug and anti-crime taskforce be setup in each of the 73 electoral districts across Liberia;
5. That an equipped center for psychosocial counseling and rehabilitation be setup in order to respond to the short and long-term needs of Zogos;
6. That Zogos be given scholarship or financial aid to pursue technical and vocational education. The need to construct more technical and vocational schools to accommodate aspiring technocrats cannot be over-amplified;
7. That Zogos be trained in life skills and empowered with micro-loan for business purpose. Incorporating Zogos in the agro (farming) and construction (building) sectors is also a genuine step forward;
8. That the social welfare component of the Ministry of Health and the Ministry of Gender be reinforced while the Ministry of Youth & Sports focuses more on youth development through capacity-building and empowerment.
Having said that, we are working on an 8-page technical paper to submit to the Government of Liberia and its partner soon. This paper will predominantly highlight causes, challenges and solutions of the ongoing Zogos’ crisis in Liberia. They are part of us. We must not outcast them. We must find solution together to reintegrate them.
I can remember some part of this year (2016), the Director General of GSA, Madam Mary Broh launched a stinging attack against zogos, but her campaign could not survive because it was never holistic and systematic. Under former Police Directors Marc Amblar and Chris Massaquoi, similar operation was launched, but it failed miserably as a result of its unsystematic and non-holistic approach. This time around, it is the Liberia National Police under Col. Gregory Coleman.

The LNP needs to refrain from doing one thing the same way and expecting different result. It needs to change its strategies and approach mechanisms. Even though I commend the LNP for the step it has taken so far, but its war against Zogos must be holistic and systematic. We commend the LNP for helping to rescue a group of people (zogos) who are nearing mental illness, but temporary and haphazard solution cannot resolve the current zogos’ crisis in Liberia!!
From the largest slum of West Point and the top of Ducor, I see a new Liberia rising above the African Continent.