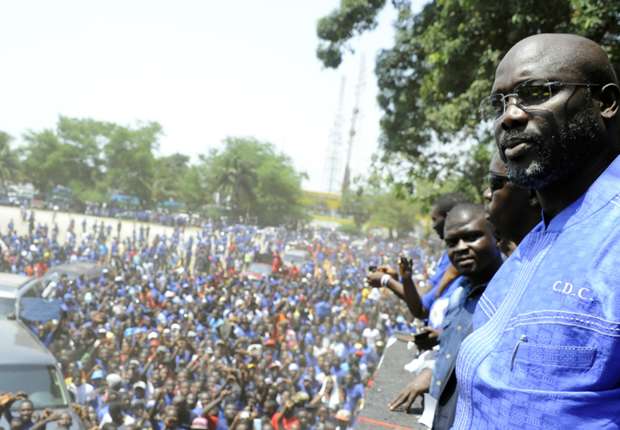 George Oppong Weah, the candidate of the opposition Coalition for Democratic Change (CDC), was officially declared the president-elect of Liberia on Friday, following a presidential run-off election in the West African country on Tuesday.

Weah defeated incumbent vice president Joseph Boakai with 61.5 percent of the total votes cast, representing a total of 732,185 votes in the election conducted by the National Elections Commission.

A total of 1,218,124 people voted in the delayed presidential run-off election on Tuesday.

Below is his profile:

Weah, a retired professional footballer, is a serving senator of the CDC in Liberia.

Regarded as one of the greatest African soccer stars of all time, Weah, born on Oct. 1, 1966, was named FIFA World Player of the Year 1995. That same year, he won the prestigious Ballon d’Or, becoming the first African player to win these awards.

Weah first announced his intention to run for president of Liberia in the 2005 elections but lost the contest to Ellen Johnson Sirleaf in the second round of voting.

In 2011, he ran for vice president on Winston Tubman’s ticket during the presidential election in Liberia.

He ran as a CDC candidate for the Senate in 2014 and won, representing Liberia’s Montserrado County.

Weah contested the 2017 presidential race with Jewel Howard-Taylor, the ex-wife of former Liberian leader, Charles Taylor, as his running mate.

Weah will emerge as Liberia’s 25th president when he takes office in January. Enditem