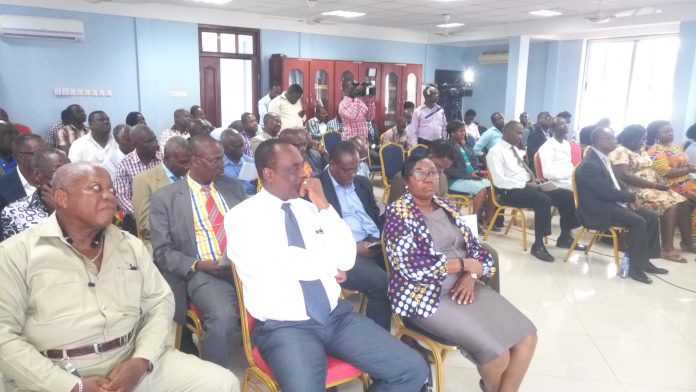 As part of its desire to contribute its quota towards the achievement of the Ghana Government’s policy objective of “Ghana beyond aid” in the land sector, the Licensed Surveyors Association of Ghana (LISAG) has served notice it will soon embark on serious advocacy actions that would compel strict enforcement of Regulations 10 of Legislative Instrument (L.I. 1444) which deals with “Plan of Partly Surveyed Land not to be Approved”. Preside t of the Association Surveyor Kwame Tenadu Snr, announced this at the maiden seminar of LISAG held in Accra.

This according to him would trigger the enforcement of Section(1) and subsection (d) of Article 258 of the constitutional mandate of the Lands Commission to ensure “the execution of a comprehensive programme for the registration of title to land throughout Ghana.

The seminar was on the theme “Land Ownership and Registration: The Role of a Licensed Surveyor”. It examined the processes and legalities involved in owning and registering land, the functions or responsibilities of a licensed surveyor in the course of the processes, among others.

According to Surveyor Tenadu, the choice of theme for the meeting was largely informed by the recent endless incidents of land ownership disputes in Ghana and the need for local strategies years after trials and expensive adventure with foreign advice and borrowed capital.

“Before we set sailing, we should discuss the question on how Regulations 9 and 10 of Survey (Supervision and approval of plans) regulation 1986 LI1444 affect our practice whilst at the same time bringing to sharp focus chapter 5.3 of the Ghana Land Policy Document including the Constitutional directive in Article 258 (1) (d). As an association of land surveyors, ours is to obey policies, rules, regulations, laws on survey and the Constitution of Ghana respectively. This fundamental decision has to be taken by all of us at this meeting,” he stated.

“The association as part of its collaboration policy had an engagement with the World Bank during its ISM mission to Ghana in 2017/2018. We were encouraged by the desire of the World Bank to extend LAP 2 by focusing on private sector actors (e.g. LISAG) to support state Institutions for project implementation. The task team leader having had a draft copy of a concept note which had been prepared for the then Minister of Lands and Natural Resources, Mr. Peter Amewu for his study found the worth considering. This concept note has since been approved by the Ministry of Lands and Natural Resources for LISAG to implement. LISAG was ultimately invited to Washington by ISM Task Team Leader for further discussion on private sector involvement in LAP 2.5 if government decided to proceed,” the president stated in his account to the meeting.

He said as part of its policy action, LISAG has set for itself the ultimate goal of uniting every land surveyor everywhere. “In this regard, it is our desire to mobilize all students in all Geomatic faculties in the country’s Universities to be part of our family in an organic manner”.

Delivering the Key Note Address, Dr. Surveyor Lennox Agbosu pointed out some perceived mistaken assumptions which according to him has been created in the minds of some certain people that the Lands Commission is not subject to the control or direction of any one.

“This appears to be some superficial interpretation of section 6 of Act 767. It reads: “Except as otherwise provided in the Constitution or in any other law the Commission shall not be subject to the direction or control of any person or authority, in the performance of its functions”.

According to him this provision must be understood subject to Article 257(1) and Article 258(1) (2) of the Constitution.

“Legal Title in all Public lands vests in the President in trust for the people of Ghana, and the Minister of Lands can give directions to the Lands Commission on matters of policy to which the Land Commission shall comply. The misinterpretation of section 6 of Act 767 must not give false confidence to any person or persons in the commission to think that he can act with impunity in the teeth of the Law while performing the functions of the Commission. A servant cannot be greater than his master,” he stated.

Among LISAG’s aims and objectives is to make positive impacts on surveying and mapping in Ghana. The current Executive Committee of the Association says they are poised for growth and are focused on sustaining resilience by enhancing reputation and performance while developing strategies to ensure that they deliver value to their stakeholders across the country and abroad.