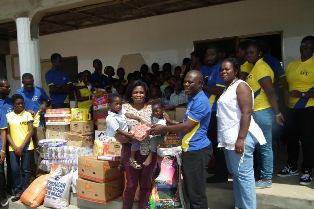 In its bid to restore hope to needy children in the society, Life Foundation Club, a non-profitable Christian organization has presented GH 7000 worth of items to the Shekinah Orphanage home at Prampram in the Greater Accra region. The items which include toiletries, canned foods, bags of used clothing, assorted beverages, stationary and a detergents were donated to the home to assist with their operations.

Performing the presentation, Mrs Esther Mensah, an executive of the Club observed that children are special blessing from God and that their welfare must not be compromised for any reason at all, it is no fault of these innocent children to find themselves here, we as a club will contribute our quota to their economic, social, physical and spiritual development for the coming years , she added.

She further called on civil societies, philanthropist, churches, schools and individuals to help with the upkeep of such children,? all that is required of us is to help these younger ones realize that God given potentials, so that they do not become a nuisance unto the nation? she lamented.

Peter Badu, a patron of the club noted that the gesture forms part of their social cooperate responsibilities, he explained that the evangelism work will not see the light of day when the physical, social and economic wellbeing of the target audience is in shambles, and that is what we take pride in, he mentioned.

Elle Annan, the Cordinator for Shekinah Home who received the items expressed gratitude for the kind gestures offered them, and assured the donors that the items will be put to good use.

The students entertained the inmates of the home to a variety of music amidst dancing completion, games, food and a wide range of drinks. Life Foundation Club is a subsidiary of Life International College .