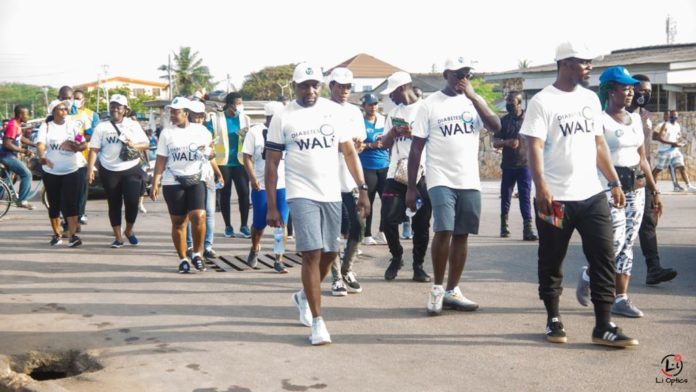 Lions Clubs, community service-oriented clubs in Ghana, subsidiary of the Association of Lions Clubs International, has held a health walk, as part of efforts to deepen the fight against diabetes.

The 10-kilometre walk, held in collaboration with Jos Pharmaceuticals Limited aimed at creating awareness on diabetes, as part of activities to commemorate the World Diabetes Day in November, at Mamprobi.

The walk, on the theme “United in Service”, started from the Electricity Company of Ghana (ECG) branch at Korle Bu, through Chorkor and some streets of Mamprobi, ended at the premises of Jos Pharmaceuticals, at Mamprobi.

As part of the exercise over 2000 leaflets on diabetes education information were shared to the public; the organizers also used the community information centre to make announcement on the causes of diabetes and how people could prevent it or even managed the condition.

Mr Christopher Conduah, the President of the Accra Metro Lions Club, in an interview with the Ghana News Agency (GNA), after the walk, noted that they also used the occasion to invite the public to the free testing and screening at the premises of Jos Pharmaceuticals, at Mamprobi.

He said the forthcoming event scheduled for November 14, would also include free medication for the first 30 days, for those who would be diagnosed with the condition.

Mr Conduah told GNA that as a group, the service impact for the diabetes had two objectives; to create awareness on diabetes and then also provide assistance to those living with the condition, saying, this had been the service framework for Lions Clubs International.

Dr Joel Sarsah, Chief Executive Officer of Jos Pharmaceuticals, also described the collaboration as a good course, noting that, people were walking with diabetes unaware and before it gets bad it could lead to amputation, hence the need to start the campaign now.

He said the November 14 event would witness the screening of lots of people not just for diabetes, as diabetes itself comes with issues like high blood pressure and cholesterol.

Dr Sarsah said there would be a bunch of physicians from Korle-Bu, Mamprobi Polyclinic and other allied healthcare professionals that would support this course; “is a free programme, and that’s our contribution to the community; at least screen and make people aware and also give them the first dose and then refer them if necessary”.

He said the record showed that there were 463 million people around the world who were at risk of diabetes, underscoring, the need to encourage people to get checked, know their status and as well seek treatment.

Mr Ankrah told GNA that there were two types of diabetes and the type 2 diabetes was usually caused by issues with one’s lifestyle, and so, “is important that people understand where the risks are, what their status is, and also start treating themselves so they can reduce the risk and impact of diabetes in Ghana”.