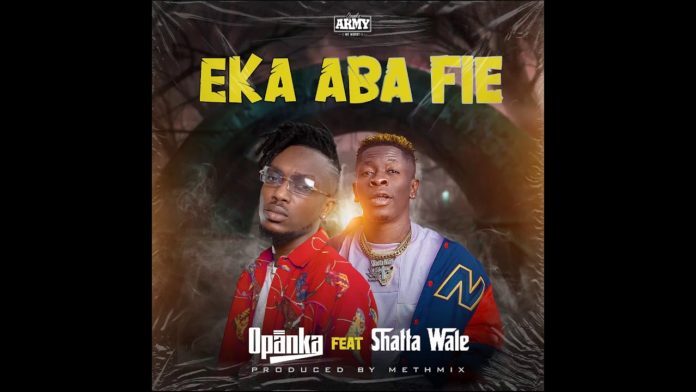 The song which was released on November 20 and produced by Methmix saw a lot of buzz on social media before and after its release.

In the song, Opanka sang that he engaged in some acts which he mentioned had caused him nothing but troubles.

He gave a scenario where he went for a friend’s party and took an expensive phone from a friend to take a photo of himself only for the phone to fall which caused a crack on the screen.

Opanka sang that the cracked phone screen had caused him lots trouble saying in the twi language ‘Eka Aba Fie’ which denotes the title of the song.

He sang that if he went in for a car and if he knew the car would engage in a clash he would not have taken the car, because it had brought him financial loss.

The ‘Wedding Car’ hit maker sang that, his mum should redeem him from the countless troubles he had gotten himself into despite the fact that he has a reserved personality.

The dancehall King Shatta Wale in a gloomy voice also sang on how he had made some losses (Eka in twi language) due to some actions and decisions he took, one being taking a loan from a bank.

Prior to the release of ‘Eka Aba Fie’ Opanka has released songs like ‘Wedding Car’, ‘Yo Geng’, ‘Coming Soon’, ‘Abubro Nkosua’ ‘Hold on’ and others.

Here is the audio link: