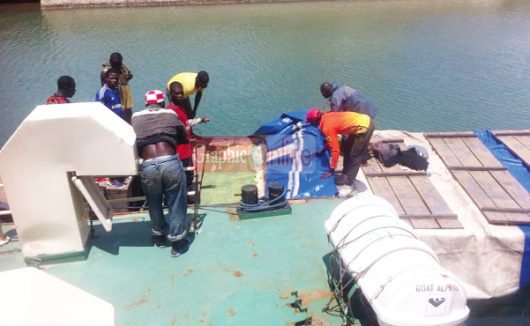 The Marine Police Unit of the Ghana Police Service has busted a fishing boat for illegally buying a bulk consignment of fish from a foreign fishing vessel offshore.
The boat ? Kitua Biaa Nsua ? with a crew of 10, was busted about 6.2 nautical miles off the coast in the Western Region early yesterday.
The crew had carried out the transshipment with Rongcheng Marine Fishing Company, the owner of the foreign vessel.
At the time of the arrest, the industrial vessel and the buyer had finished the transaction offshore and the buyer was transporting the consignment to the shore when the police intercepted the boat.

Fish
The police said during inspection, they found that the boat had 2,080 huge slabs of iced fish concealed in its compartments but had no fishing net or equipment to show that it was returning from a fishing expedition.
The Director of Marine at the Ports and Railways in Takoradi, Chief Superintendent Samuel Owusu-Berko, told the Daily Graphic that the crew confessed purchasing the fish from the foreign vessel, a transaction which is against the country?s laws.
Transshipment is said to be one of the worst challenges facing the country?s maritime domain.
Chief Superintendent Owusu-Berko said it was important to note that because the industrial vessels knew the implication of transshipment offshore, they always contacted their accomplices onshore and sold the illegal catches to them.

Ownership
C/Supt. Owusu-Berko said after the boat had been busted, a woman who gave her name as Diana Mireku came forward and claimed ownership of the consignment.
The woman and the 10-member crew have been arrested to help the police in their investigations.
C/Supt. Owusu-Berko said the arrest should serve as notice to people, especially the fishing community, that the Marine Police were on the alert and collaborating with sister agencies within the country?s maritime domain to make the coast unattractive for illegal fishing and trading.
The police, he said, had invited the Fisheries Commission for valuation of the entire consignment and take the woman who claimed ownership through the legal process.
Source-Graphic

Three nabbed at Akatsi for engaging in recruitment fraud