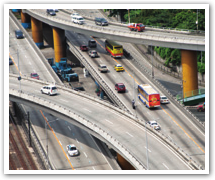 Local leaders in Manila have defended new rules that restrict access of heavy vehicles to the capital?s streets, saying the scheme will encourage smoother movements of cargo once shippers adapt to the requirements. However, opponents of the ban say it will slow trade activity, jeopardising future economic growth.

The restrictions, introduced in late February, block access to city streets from 5am to 10am and 3pm to 9pm for eight-wheeler trucks and other vehicles with a gross weight of more than 4500 kg. There are some exceptions, including vehicles carrying perishable goods and petroleum products, and those serving government projects.

The mid-day window, a temporary concession granted by the Manila administration to allow shipping companies time to adapt, is set to be closed within six to eight months.

According to Manila mayor Joseph Estrada, the ban will ease traffic congestion in the city, reduce pollution and cut down on damage to transport infrastructure. While the decision has met with strong opposition, Estrada said he will not back down from the position taken by his administration.

The shipping industry, meanwhile, claims the restrictions ? which will affect truck access to the Port of Manila ? will generate transportation bottlenecks, potentially leading to a shortage of finished goods and inputs for manufacturers, as well as delays in exports.

To make up for the reduction in working hours, some trucking lines have already imposed additional fees, including congestion charges, and pushed up their rates. In late March, the Confederation of Truckers Association of the Philippines announced its members were raising rates by 50%.

However, the greater cost of the reduction in truck capacity may well be short-term supply shortages, according to Christian Gonzalez, the Asia regional head for International Container Terminal Services, which runs the Manila International Container Terminal. While businesses that rely on imports could look for solutions ? such as holding more stock in inventory ? any adjustments will necessarily generate additional costs, he told OBG.

The ban may have a negative impact on outbound traffic as well. In a study published by Citi Research on March 7, economist Jun Trinidad said there could be a significant loss to the economy if the restrictions were to stay in place without an alternative route to connect the Port of Manila to the economic zones of Cavite, Laguna, Batangas, Rizal and Quezon (CALABARZON). If the new rules cause export delays that persist, he wrote, this could jeopardise production and jobs in CALABARZON, reducing GDP by 1-5%.

In dollar terms, this amounts to $1.4bn-7.1bn, compared to the gain from the reduction of traffic, which Trinidad said stands at $664.5m, based on an analysis by the Japan International Cooperation Agency.

Responding to complaints from shippers, on March 18 Public Works Secretary Rogelio Singson told an economic briefing that those all along the logistics chain will need to adapt to the new schedule and make the best use of the times available to them.

?The window should be sufficient. Unfortunately, we still need to get all the stakeholders like the port operators, the Philippine Port Authority and container yards to cooperate in the sense that they should be open in the evening during the window,? Singson said.

Any longer-term solution may well involve increased use of the other large trans-shipment centres that serve the city and the surrounding area, such as the Batangas and Subic ports.

In a recent interview with OBG, Roberto Garcia, the chairman and administrator of the Subic Bay Metropolitan Authority, said that, of the 2.8m containers that pass through the Port of Manila, some 450,000 come from or are destined to Northern and Central Luzon. If they pass through the Port of Subic, this will substantially relieve both the port and traffic congestion in Manila.

However, the transport industry says Batangas is too small and Subic too far away. Batangas has an annual capacity of 300,000 containers a year, compared to the Port of Manila?s 3.8m. For manufacturers located in or near Metro Manila, exporting through Subic is likely not a viable alternative.

While many transport companies and industrialists may prefer the Port of Manila, it is not without its challenges. As Richard Barclay, CEO of Manila North Harbour Port, told OBG, ?Unlike other major hub ports, Manila has no port access road or a fly-over pass to connect the access road with new highways, which creates significant hurdles for the flow of trade to and from the ports.?

The government has been trying to fast-track infrastructure investments, both through direct spending and a public-private partnership scheme, but it has not been able to maintain the flow of projects to meet the mounting demand of the economy. If the city?s secondary ports are to carry much of the load currently borne by the Port of Manila, access to and between these ports and other economic zones may well need to be upgraded.