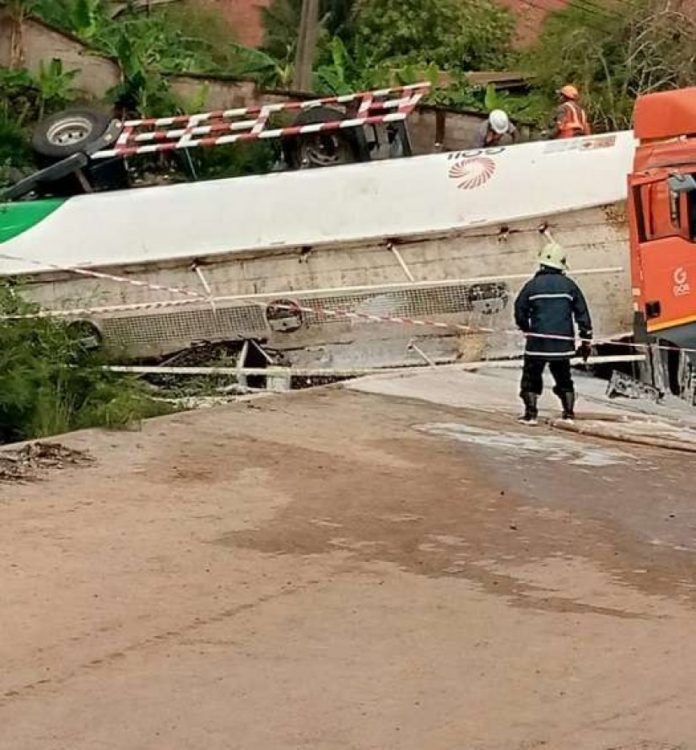 A Locomotive (train head) belonging to the Ghana Railways Company Limited on Wednesday crashed into a faulty fuel tanker on a portion of the rail lines linking the Sekondi-Kojokrom- Takoradi Harbour.

No casualty was recorded.

Confirming the story to the Ghana News Agency, Mr. Charles Brown, the Public Relations Officer of the Ghana Railways Company Limited, said the driver of the fuel tanker, which had loaded fuel from Ghanstock and heading towards Goil terminal, developed an engine failure upon reaching a section of the train line.

According to him, the tanker driver tried to work on the vehicle but was unsuccessful, which attracted the Level Crossing Keeper to go to his aid, but it did not also work.

The PRO indicated that just when the level crossing keeper had warned of how risky it was to stay on the line, the Locomotive reared its head.

Mr. Brown said, “Unfortunately the spot was a curve so signaling the Locomotive about the incident with the red flag did not help much since the train head could not make an abrupt stop”.

Meanwhile, it took the fire service a real hurdle to clear the rail of the debris after the crash that got the content of the tanker spilling all over the place.

DO III, Emmanuel Bonney, the Western Regional Public Relations Officer of the Ghana National Fire Service, said it took personnel more than eight hours to work on the defect to bring sanity on that portion of the rail.

He explained that initially, the Service “foamed the area” to avoid any flames, which he noted enabled them to remove the tanker from the rail without any fire outbreak.

The tanker driver and his mate according to the Fire Service PRO later reported themselves to the Police for further interrogation.