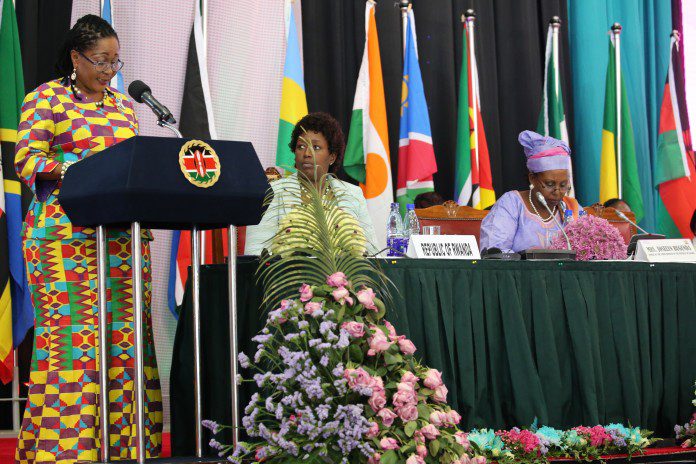 In Ghana it is estimated that 6. 7 million women over the age of 15 are at a risk of developing cervical and breast cancers. It is also predicted that by the end of the year, there will be over five thousand new cases of cervical cancer in Ghana with the possibility of about three thousand three hundred deaths. The First Lady Lordina Manama announced this when she addressed the 9th Stop Cervical, Breast and Prostrate cancer in Africa conference in Nairobi, Kenya.

The the 3-day conference which was on the theme: ?Investing to Save Lives, The Role of Public-Private Sector Partnerships? attracted First ladies, representatives, parliamentarians, Ministers of Health, health professionals and scientists.

Mrs Mahama told the over 4,000 delegates attending the conference from all over the world that across the continent, just like Ghana, various actions were being implemented, but more action was needed ?if we are to reduce, if not eliminate, death from these cancers in the shortest possible time?.

She said her organisation, the Lordina Foundation, working under the Organisation of African First Lady Against HIV/AIDS (OAFLA) umbrella, was effectively partnering with the UT Cares Foundation to raise awareness on breast cancer, through what was called the Pledge Pink Campaign.

She said the benefit was that they were able to augment the efforts of the Ministry of Health by sending Mobile Screening Vans to the hinterlands all year round.

The conference also interrogated the status of cancer in the context of sexual reproductive health in Africa with particular focus on girls, adolescent, youth, women and men of reproductive age and create the awareness that cervical cancer is now preventable.

Lordina Mahama noted that across the continent, just like Ghana, various actions are being implemented but more actions are needed to reduce, if not to eliminate, deaths from these cancers in the shortest possible time.

The First Lady believes with the implementation of the National strategy for cervical control in Ghana, the country can reduce mortality from cancer by 30 percent through primary, effective screening and early detection.

She however urged African governments to be concern with issues of women healthcare since they are a major contributor to economies and are paramount in the quest to ensure a healthy and safe family.

Adding that, governments must join hands with First Ladies to demonstrate a shared responsibility in treating the health of women as a priority.

She also advised her colleague First Ladies to promote collaboration with non-governmental organisations as well as the private sector, since government even though commit funds into health project, is faced with budgeting constraints.

Keyan’s First Lady, Margaret Kenyatta who hosted the conference, said globally cancer kills over 8 million people every year constituting 13 percent of total deaths worldwide. She said in Kenya cancer ranks third as a cause of death after infectious and cardiovascular disease accounting for 7 percent of total national deaths. This harsh reality she believes calls for concerted effort aimed at promoting cancer, prevention, early detection and treatment.

To achieve this she expressed the need to build and promote partnerships and collaboration in cancer control for better healthcare outcomes.

The Conference was jointly organised by the Forum of African First Ladies Against Breast, Cervical and Prostate cancer and the Princess Nikky Breast Cancer Foundation under the auspices of the First Lady of Kenya.