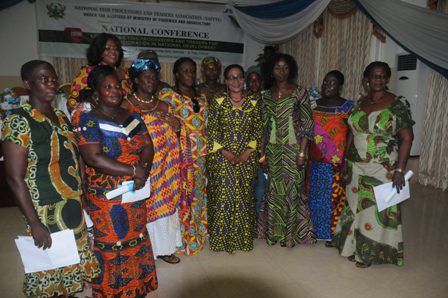 The First Lady Lordina Mahama has lauded the role of women in the fisheries sector. She said their role as financiers, processors and traders in the distribution of fish and fish products has impacted on the economic development of the country. This achievement she said calls for greater attention on the mobilisation of women in the informal sector who work in the fisheries value chain. Mrs. Mahama was speaking in Koforidua when she inaugurated the National Fish Processors and Traders Association, NAFPTA. She said the inauguration would aid the realisation of Governments Agenda for Transformation.

In the last 20 years, the issue of women in Fisheries has become increasingly important, particularly following the International Women’s year, subsequent World Conference on Women and the World Food Summit. The International gathering and policy recommendations gave significant boost to the call for greater awareness on the role of women in development and the responsibility Government bears in supporting the integration of women into all levels of national development.

The Beijing conference on women in particular highlighted the need to promote the status of women in the implementation of gender sensitive economic policies and programmes. The First Lady said the inauguration of the Association would aid the realization of Government’s Agenda for Transformation.it will specifically facilitate the effective inclusion of Fish Processors and Traders into national policy discourse.

She asked the Association to ensure that fish processors and traders have unified voice and are represented in national, regional and international fora, and especially in relation to fisheries policies and programme.

The Minister of Fisheries and Aquaculture, Sherry Ayittey said women play a vital role in the processing of fish, though they do not go fishing. She added that the ministry would give women a voice through the National Fish Processors and Traders Association.

Madam Ayittey said the Ministry together with the Fisheries Commission and the West African Regional Fisheries Programme (WARFP) facilitated the setup of this association to ensure that Fish Processors and Traders have a unified voice in all their endeavours and to make collective contributions, to fisheries policies and programmes at the National, Regional International levels.