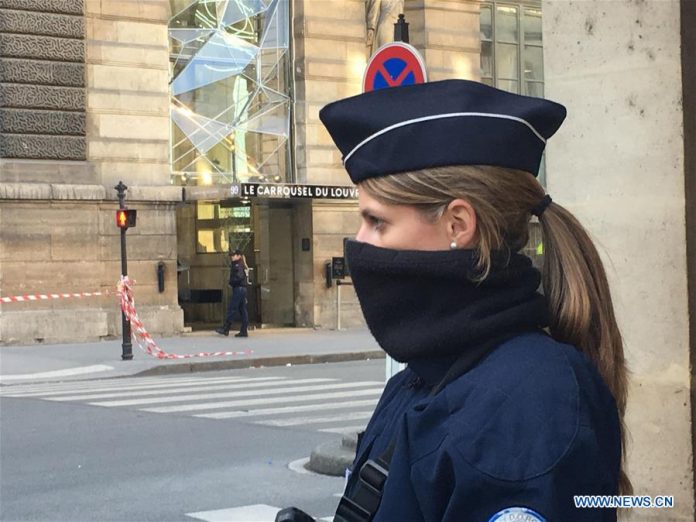 Police officers cordon off a street near the Louvre Museum in Paris, France, on Feb. 3, 2017. A French soldier on duty opened fire on Friday at a man who tried to attack him with a knife at the entry of the Louvre Museum, according to local press and witnesses. [Xinhua/Ying Qiang]

A machete-wielding man who on Friday attacked soldiers near Louvre Museum and was shot, was an Egyptian national who arrived in France from Dubai at the end of January, Paris prosecutor Francois Molins said at a press conference on Friday evening.

“The identity of the perpetrator is not formally established, but the searches allow to identify a 29-year-old Egyptian citizen,” Molins told reporters.

Paris prosecutor said the attacker was not carrying an ID but a photo registered in Visabio (a European biometric database including digital photography and fingerprints of visa applicants) was the same of the machete-wielding man.

Investigation is underway to determine the motive and to establish whether the attacker acted alone or have been guided, he added.

According to initial indications, the attacker, not known to intelligence services,came from Dubai on Jan. 26 after acquiring a one-month tourist visa. Two days later, he bought two machetes at a store in French capital.

During a raid in the suspect residence which it rented in Paris’ eighth district, the police had found 900 euros (970 U.S. dollars) in cash, an iPad and several pre-paid cards.

He slightly injured a soldier in his scalp before he was shot and seriously wounded.

France where terrorist alert remain at high level, has imposed emergency rules since Nov. 2015 attacks in which gunmen and suicide bombers claiming allegiance to the Islamic State (IS) killed 130 people in French capital.

A recent attack left 86 victims when a man drove a truck into a crowd celebrating the Bastille Day in the southern city of Nice last summer.

“The incident was completely controlled but (terrorism) threat is here to stay and we must confront it,” Hollande said at a meeting of EU leaders in Malta.