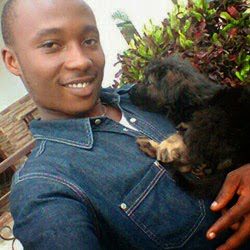 21-year-old student of Maritime Academy Oron, Effiong Otu committed suicide by hanging himself on a rope in his room on Thursday morning after he was jilted by his girl friend.

According to reports,this happened on the same day he was marking the 10th anniversary of his dad who died in a car accident. After the anniversary, his family members left the house and he went to a neighbour to borrow a rope.

Moments later, the suspicious neighbours wondered why he needed a rope and went to check on him but found the door locked. Before they broke down the door,he had passed on.

Before hanging himself, he was said a called a friend telling him to tell a certain blessing at UNICEM that she should be happy he has killed himself over her?

On the 6th of July,he posted the following message on Facebook
?It?s not about being engaged, married or in a relationship. It?s about being happy, safe, secured, relieved and feeling good. It?s about peaceful state of mind, it?s about sleeping at night without the fear of losing what you?ve got.
It?s being yourself and not someone else, it?s about feeling loved, happy, respected, understood, cared for and appreciated.!