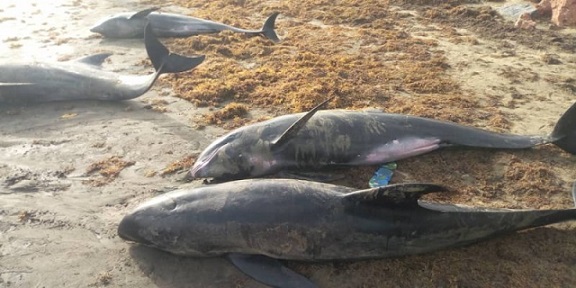 Low oxygen concentration is the cause of the recent fish mortality in the country, preliminary scientific investigation by the Marine and Fisheries Sciences Department of the University of Ghana, has revealed.

The Department said results from water quality analysis showed that most parameters required for life in the ocean were within acceptable limits, with the exception of Chemical Oxygen Demand (COD), which was significantly higher than expected.

In a press release, it said that oxygen demand would most likely create a condition of stress on living organisms that depended on dissolved oxygen in the water body.

The finding is in line with that of the Fisheries Commission’s, which indicated that stress factors caused the deaths.

The statement said few days to the fish kills, there was a sudden drop in sea surface temperature as observed from satellite imageries over the coast from Cote d’Ivoire to Togo.

“This is most likely an indication of upwelled water from the bottom of the ocean, probably carrying low oxygen concentration. At this stage, we do not have any data on what triggered these incidents,” it said.

The statement called for an ocean-monitoring programme to be established as a matter of urgency.

With regards to the possibility of an incidence of harmful algal bloom, the scientific preliminary investigation did not observe phytoplankton abundance to be at the level to cause a bloom, the statement said.

“It must be noted that species of phytoplankton that potentially cause blooms resulting in fish kills have always been in our waters. It is their higher than normal levels that could lead to a situation of harmful bloom,” it said.

The statement assured that the Department would continue to monitor the oceanographic processes and communicate when necessary.

It noted the fish species that were killed were both demersal, and pelagic of both small and large sizes.

“We confirm the identification of the marine mammals found dead along the coast as the melon-headed whale, a dolphin belonging to the Cetacean order”, it said.

The statement reiterated the Department’s call on the government to acquire a research vessel that would carry out regular monitoring on the country’s coastal waters, “…to avert any future calamity. The impact of global climate change and its vulnerability is real and coastal states are the worst to be affected,” it said.