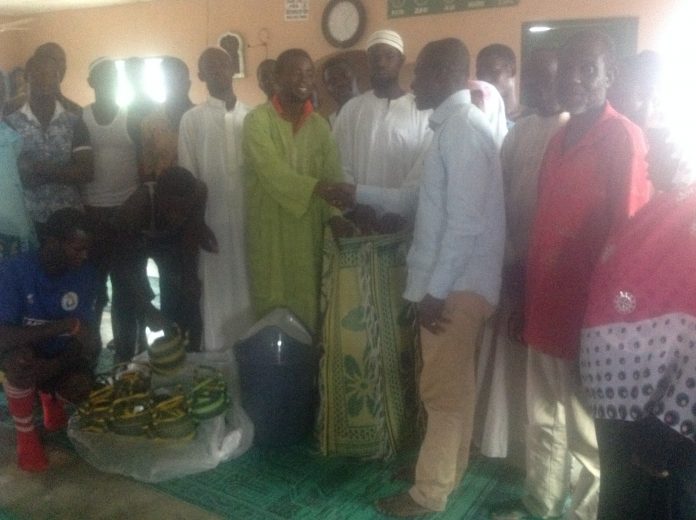 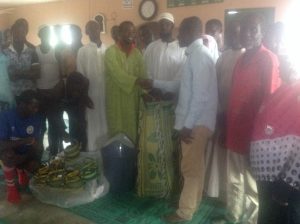 The gesture was aimed at supporting the Muslim Communities at they round up to break their 30-day period of fasting and prayers from the office of the Nkosuohene under the distinguished supervision of the Omanhene of Lower Axim Traditional Area Awulea Attibrukusu III.
Items donated to beneficiary communities were made up of mats, water cans ‘buta’ dustbins, a set of jersey and football.
Yediyesele Community received ten (10) water cans, ten (10) mats, a dustbin, a set of jersey and a football upon a request from the Muslim youth, whiles the Alasuna and the Axim Central Mosque all of Axim received ten (10)  water cans, ten (10) mats and dustbins each as well as Nyamebekyere and Ewoku all receiving the same number of items respectively.
In his message, Nana Osei Nkwantabisa called on the various Muslim leaders to promote peace and unity among themselves by serving as role models to the youth in all manner of their endeavours.
He admonished parents to invest into the education of their wards to enable them become useful to the society in the future, adding that his office will continue to support the good course of education as the development chief.
The leaders on their side expressed their great appreciation for the gesture, adding that it was the first to be witnessed.
Send your news stories to newsghana101@gmail.com and via WhatsApp on +233 244244807 Follow News Ghana on Google News

We have not enstooled any Chinese as Nkosuohene-Abetifi Chiefs

Chiefs and people of Kofi Kwei launch plans for development