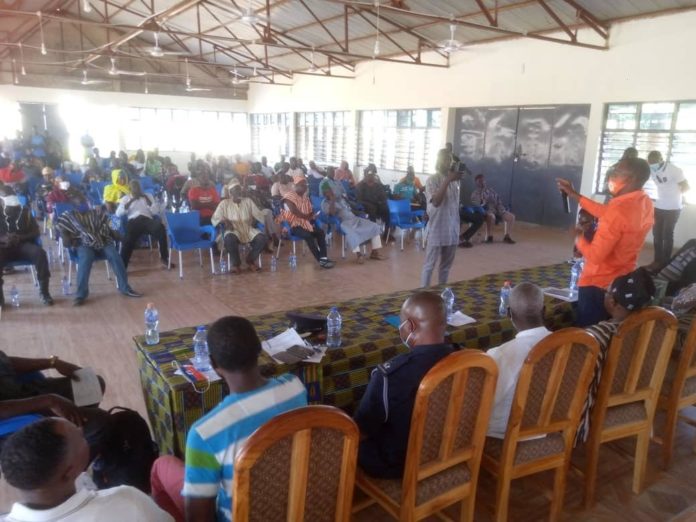 Mr Kasim Siniwani, the Parliamentary Candidate in the Bawku Central Constituency of the Upper East Region on the ticket of the Liberty Party of Ghana (LPG) has promised to establish a disability welfare institution in the area if given the nod as the Member of Parliament (MP).

The institution, according to him, would be dedicated solely to the empowerment and wellbeing of Persons with Disabilities (PWDs) to develop their skills and knowledge, promote inclusive governance and sustainable development.

The 28-year old Over the Counter Medicine Seller made the pledge in Bawku during a Town Hall Meeting organized by the Governance, Justice and Peace Commission of the Ghana Catholic Bishops Conference with funding support from the Konrad Adenauer Stiftung (KAS), a German based Non Governmental Organization.

It was facilitated by the St Anthony of Padua Parish of the Catholic Diocese of Navrongo-Bolgatanga in collaboration with National Commission for Civic Education (NCCE) and it brought to political party activists, and members of the public.

However, with the exception of the LPG aspirant all the four candidates failed to appear.

Addressing the constituents, the LPG Aspirant asserted that welfare and development of persons with various forms of disability had not received the needed attention from past and present leaders and noted that with the setting up of such an institution, the concerns of the vulnerable group would be properly addressed.

He said the institution would be adequately equipped with the needed resources to register and support PWDs who wish to learn various kinds of trade as well as support them to either expand their existing businesses or establish new ones to increase income generation and improve livelihoods.

Mr Siniwani said the country was moving to the digital world and therefore promised that the skills development training and programmes that would be designed for the persons with disability would be technologically based to ensure that they were abreast with modern knowledge and skills that would enable them to set up their own businesses and employ people.

Mr Siniwani also promised to pursue vocational and technical initiatives in the area to empower young people in the constituency with employable skills to either be employed or have the capacity to establish and run successful businesses.

He promised to improve on the quality of education in the area by establishing a scholarship awards scheme for needy but brilliant students while motivating teachers through lucrative incentives to ensure that they delivered well in classes.

Mr Siniwani who pledged to effectively represent the people of Bawku Central appealed to the electorate to give him the chance by voting for him on December 7.

Mr Emmanuel Laar, the Bawku Municipal Director of the NCCE noted that the town hall meeting was to afford the Parliamentary candidates to interact with the electorate and outline their visions and policies towards the elections.

It was to also create the platform for the Aspirants to respond to questions regarding efforts to improve on quality of education, health, employment and women and youth development to ensure sustainable development.