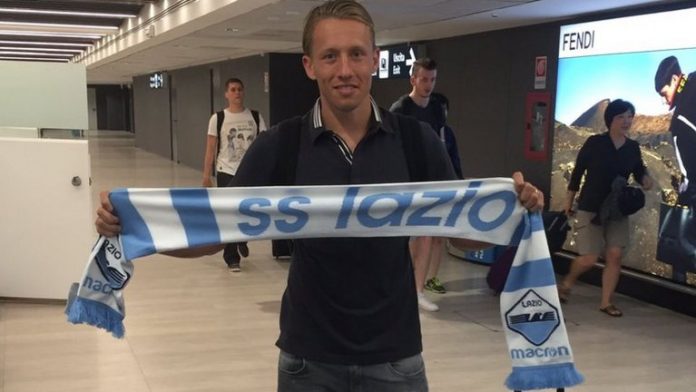 Midfielder Lucas Leiva completed his move from Liverpool to Lazio on Tuesday, signing with the Serie A club.

Liverpool confirmed the Brazil international’s switch, and the player will be desperate for more first-team football after falling down the pecking order at Anfield.

While he was used sporadically by manager Jurgen Klopp last term, Lucas would have faced a fight to make the matchday squad for many Reds games if he had stayed.

“Thank you for all the support, especially in difficult times—that’s when it means a lot,” Leiva said in a release from Liverpool. “We all know that Liverpool fans are really special and they were always here for me.

“I’ll always be watching and supporting Liverpool, and for sure I’ll be back in the city to visit friends and watch games in the future.”

His new employers will be getting a defensive midfielder with plenty of pedigree, though. Levia is a tenacious tackler, an astute reader of the game and an understatedly savvy distributor of the ball.

In the Italian top flight, he should relish the slower pace of the game, especially when you consider harsh luck with injuries has robbed Lucas of some of his dynamism.

It’ll be galling for Lucas to leave Liverpool behind after 10 years, especially with a sense of potential unfulfilled. Still, at the age of 30, he still has time to make a big impression at his new club.

With regular football and more responsibility, expect a big upturn in form for the player at Stadio Olimpico. After so many years of diligent service, Lucas will always be welcome back at Anfield too.