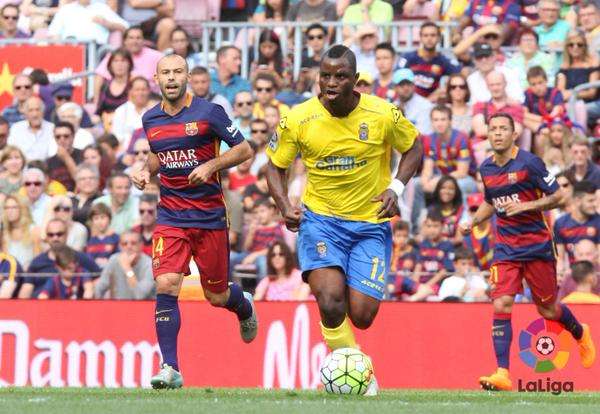 Wakaso Mubarak had a boot in the face from Luis Suarez

Controversial Uruguayan international Luis Suarez was booked for driving his boot into the face of Ghana winger Wakaso Mubarak during Barcelona?s La Liga clash with Las Palmas on Saturday afternoon.

The 25-year-old put up an outstanding display in midfield overshadowing Argentine international Javier Mascherano and the rest of the Barcelona midfield in a tight contest. However he was booked in the 58th minute for challenging referee Ricardo De Burgos for booking a Las Palmas midfielder.

In a game that saw Luis Suarez scored twice to win the game for the Catalans, Wakaso clashed with the controversial forward as he drove his boot into the face of the Black Stars player.

Referee Burgos punished the cantankerous striker for his bad-tempered challenge on the Ghana international.

The injury was harmless as Wakaso was able to continue the rest of the game for his side who have won just one of their opening five games of the season.

Wakaso, on loan from Russian Premier League side Rubin Kazan?, has started all of Las Palmas? last two games in in the Spanish La Liga.