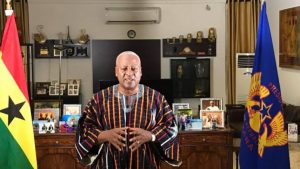 “We inherited an economy that was running a high deficit with increasing inflation and interest rates,” he told lawmakers in his last State of the Nation Address.

“It was also characterised by a rapidly depreciating currency,” he said, adding, “this unstable macro environment created an unfavourable investment environment for both indigenous and foreign capital.”

He said the Senchi Forum was an attempt to forge a consensus for a homegrown fiscal consolidation programme that eventually formed the basis for the International Monetary Fund (IMF) 918 million dollars Extended Credit Facility programme.

He said the facility has led to an improved macro environment with a steady decline in inflation and interest rates.

“A new public debt management strategy is also seeing a steady decline in public sector debt estimated to have dropped from nearly 72 per cent to below 65 per cent,” he said.

“The currency has also enjoyed relative stability, depreciating at just above four per cent this year,” he said.

He noted that while the deficit target would be missed this year on account of inability to meet revenue targets, it was important for managers to continue to pursue fiscal consolidation in the third and final year of the IMF programme.

“Multiple causes are responsible for our inability to meet the target,” President Mahama said.

He named the causes as being reduced lifting from the Jubilee Field on account of the turret bearing problems, non-realisation of some expected non-tax revenue such as the sale of electro-magnetic spectrum, reduced cocoa export revenue and higher than expected election-related expenditures.

In spite of the breach of the fiscal deficit target, he said, expenditure was lower than programmed and thus the approved appropriation for 2016 was not exceeded.

“Ghana’s economy is still the second largest in West Africa with a Gross Domestic Product of almost $39 billion,” he said.

“Ghana has also moved up 13 places in the ease of doing business index and is currently considered number one on the World Bank index,” President Mahama said.