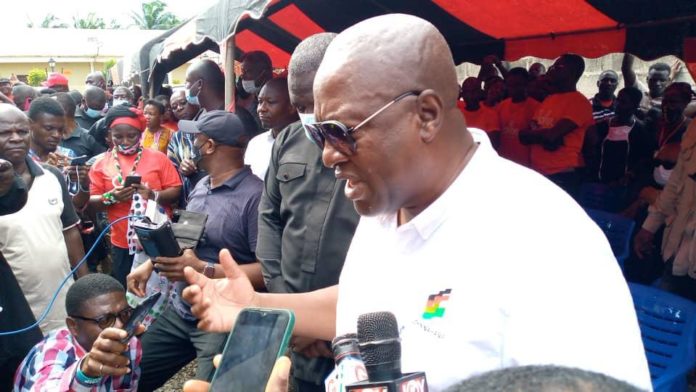 Former President John Dramani Mahama has visited the widow and family of the murdered Member of Parliament (MP) for Mfantseman, Ekow Quansah Hayford, to commiserate with them.

Mr Mahama, the National Democratic Congress (NDC) Flagbearer, who was accompanied by party stalwarts, expressed shock and disbelief at the sad news and extended his sympathy to the bereaved family during the one-week celebration held at Mankessim.

Saddened by the turn of events, Mr Mahama called for armed security for legislators and tightened security for top officials as well as the public to tame the activities of criminals and their harassment of the citizenry.

He noted that criminal activities were high, which threatened the safety and heightened the general feeling of insecurity in the country.

Mr Mahama said the MP’s death must serve as the turning point to unite all Ghanaians regardless of one’s political persuasion and work tirelessly towards sustained peace to ensure the continuous development of the nation.

“It is unfortunate that a sitting legislator seeking re-election will die this way. It is a truism that we all belong to different political parties but we must collectively find solution to the insecurity situation in the country,” he said.

Later, the Speaker of Parliament, Professor Aaron Mike Oquaye, and the leadership also attended the one-week celebration to sympathize with the family.

They donated GHC5,000 towards the funeral celebration and pledged to collaborate with the funeral committee to ensure successful rites.

Abusuapayin Kojo Nkrumah, who welcomed all dignitaries, reiterated calls for security for legislators to enable them to go about their normal duties without fear.