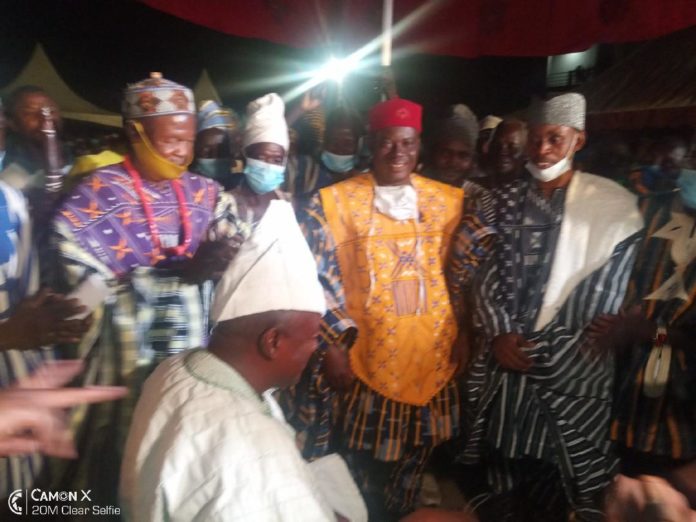 The enskinment was in recognition of the numerous development projects that Mr Mahama brought to the traditional area during his first term of office as President.

Naba Sayeed Musah Abubakari Sadik conferred the honour on Mr Mahama at durbar of the chiefs and people of Gambigo and surrounding communities in the Bolgatanga East Constituency.

The Chief noted that during Mr Mahama’s tenure, the traditional area had its fair share of the national cake, such as the Senior High School (SHS) E-block complex, which was now serving nearby communities such as Zuarungu and Bolgatanga Central.

The Chief mentioned rural electrification projects, roads and bridges construction projects as some of the achievements of the NDC Government in the area.

He also lauded Mr Mahama for appointing Dr Dominic Akuritinga Ayine, the Member of Parliament of the area to serve as Deputy Minister of Justice and Attorney-General during his first term.

Naba Sayeed Musah Abubakari Sadik appealed to Mr Mahama that should he be given the mandate by Ghanaians on December 7 to adding boarding facilities to the Gambigo Community Day SHS.

He also asked for the fixing of some roads and bridges, which were abandoned since the Mahama administration left office.

The Chief wished both Mr Mahama and Mr Ayine well in the December 7 polls.
Mr Mahama thanked the Chief and Elders of Gambigo for the honour done him and the NDC and gave the assurance that the Chief that his next administration would add boarding facilities to the Gambigo SHS for boys and girls respectively.

This, he said would enable school children who come from communities that were a bit far to be able have a place to stay and learn in order for them to make their full potential.

He noted that their roads and bridges would be fixed by his next administration. “I am happy to see this beautiful school building standing here, I think it is a mark of some of the good works that we left, not only in the education sector, but in the health sector, in water, provision of electricity, good quality roads across the lengths and breaths of this country.”

He said quality education was one of the most important ingredients needed in creating the human resource that any country needed.

“And it is important for us to continue to provide the infrastructure so that all our children can have access to good quality education,” he said.

Mr Mahama said: “We introduced the free SHS programme in 2015, that is when inaugurated it, I declared the free SHS begun in 2015. And the video is there where I announced the beginning of free SHS.

“By the time we were leaving office in 2016, we had all the day students on free SHS and we had added 146,000 boarding students to the free SHS programme.

“That is the fact. And so if some comes to tell you that when NDC comes it will cancel the free SHS that person is obviously telling a big lie because we cannot cancel what we have started.”

He said if the current Government had used their method of implementing free SHS, they would not have ended with the double track system and the next NDC administration would maintain the free SHS programme and improve upon it.

Mr Mahama reiterated that his next administration would eliminate the double track system within one year and appealed to Ghanaians to vote the NDC back to power to continue its good works.

Mr Ayine thanked Mr Mahama for providing the Gambigo Community with an E-block. “I brought you here tonight to thank you profusely for the E-block that you gave to the chiefs and people of Gambigo,” he said.

“Your Government gave us this beautiful edifice, which is serving to enhance the educational needs of the communities in the Bolgatanga East Constituency.”