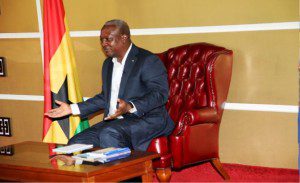 President Mahama wants ?all lawful means? to be used to get the money to the state as ruled by the Supreme Court.

This was disclosed by Mrs Appiah-Oppong in an interview on TV3 on Monday, March 16.

Though Mr Woyome was absolved of wrongdoing by an Accra High Court in the payment of the judgement debt, the Supreme Court had earlier ruled ? through a suit filed by Former Attorney General Martin Amidu ? that Woyome refunded the money to the state.

The Attorney General?s Department has already served a notice of appeal on Mr Woyome, calling the judgement of John Ajet-Nassam ?wrongful?.

?I have the support of the president to pursue the appeal,? the Attorney General told TV3?s Edward Kwabi on Monday.

?I have the support of the president to use all lawful means to recover the money that the Supreme Court has said he should pay back and I intend to continue doing so.?

But Mr Woyome has questioned the integrity of Mrs Appiah-Oppong to force him to refund the money, accusing her of benefitting from the judgement debt ?fruit?.

?It is my firm belief that another Attorney General should be the one pursuing this issue further since you are wearing a biased lens in making decisions concerning this case,? Mr Woyome indicated in his letter.

But Mrs Appiah-Oppong has mounted a strong challenge to this, indicating her firm was only involved in a different case though involving Mr Woyome.