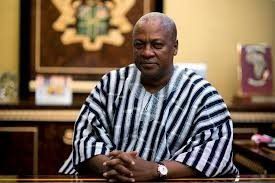 Speaking at the launch of the ‘The Africa Report’ inaugural debates 2015 in Accra, he said democracy ensured freedom, respect for human dignity, happiness, provision of utilities, quality education and good health.

However, he said, the practice was not perfect anywhere in the world.

President Mahama said “Africa has fought and fought, pushed and pulled to get to where it is today, I don’t think we’ve been practising democracy long enough to say that it isn’t working.”

He said each country should allow its democracy to evolve into a system which is representative of that culture.

“In democracy the citizens of a nation do more than decide who their leader is and who their representatives will be,” the President said adding that “they also decide what their priorities in nation building should be.”

Dr Mohammed Ibrahim, Founder of Mo Ibrahim Foundation, rejected suggestions for the Africanisation of democracy saying “I don’t belief there is something called African democracy or African football, we are just normal people.”

The Sudanese British mobile communications entrepreneur and philanthropist said “the world has moved on, we need to wake up” adding that there was the need for African leaders to respect universal human rights.

“Even if we make a mistake it does not matter, we must correct them and move on,” he said.
GNA