That President Mahama’s recent reshuffle exercise is wrongly timed and uncalled for is an understatement. 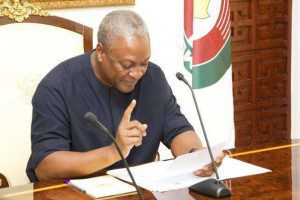 It is wrongly timed because 2016 is an election year with elections just ten months away. Realistically, any minister who has been nominated by the President now for appointment has only six months to make an impact against the background of the President and his Government’s 2016 lame duckstatus. TheGovernment’s lameduck status stems from the fact that every election has some element of uncertainty regarding its outcome. Therefore to appoint new ministers within the context of the Government’s lame duck status and expect them to make any positive impact in performance is unrealistic and ill advised.

President Mahama and his advisors should as a matter of positive strategy desist from looking beyond 2016 in any decisions that they take especially in this election year. This is due to the fact that the impression that one gets with this untimely reshuffle is that it is premised on a high level of complacency regarding the outcome of election 2016. There is obviously a case to be made for optimism, but some level of measured optimism should also be factored into executive decisions that are taken in election years.A proper mindset therefore for government is to presume that there is a fresh mandate to be secured from Ghanaians in November 2016 by competing candidates in the election, a mandate that has to be secured with prudent election year decision making among other factors.

Any decision of Government that has a tendency to destabilize the executive arm of government such as a massive reshuffle of ministers in January 2016 of an electionyear is ill advised. In this regard therefore President Mahama’s reshuffle of last year should have been his last before the 2016 election.

The current reshuffle is uncalled for not only because of its timing but also for its likely negative impact on delivery of government services in a critical year. The reality on the ground is that public servants in Ghana generally adopt a wait and see attitude to government ministers and officials, especially from June of every election year to the election date.

This islargely due to the uncertainties that naturally accompany the outcome of elections. These new ministers therefore have very little opportunity to make an impact. Sticking with existing ministers under the circumstances is therefore politically prudent unless in extraordinary cases that call for change of ministers regardless of timing. Thereshuffle which has been presented on account of flexing of executive power also gives a perception of unpredictability and instability of Government going into an election, when the perception of the incumbent government should be that of stability.

The other aspect that a reshuffle presents is its effect on the party front. It engenders pockets of dissatisfaction and dissullionment on the front of the President’s party on the part of party members allied with reshuffled ministers, chiefs, localities and even communities that are attached to theseministers who are likely to feel aggrieved and dissatisfied by their reshuffling especially in an election year.

In totality therefore, President Mahama’s recent reshuffling exercise is an unnecessary headache that he has visited on himself, his government and theNDC in an election year. The exercise connotes some level of complacency which in terms of strategy is not politically prudent. He should have his eyes on the ball of November 7, 2016, and let that guide his decisions and note that election yearreshuffles can be politically and strategically imprudent and should be avoided at all cost.