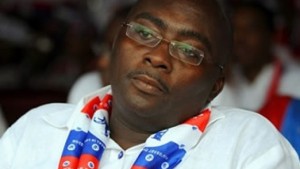 Dr. Mahamudu Bawumia, was on Saturday, January 7, sworn into office as Vice President of the Republic of Ghana.

He becomes the 6th Ghanaian to occupy the high office since Ghana begun democratic governance in 1992, and he will serve alongside the newly sworn-in President, Nana Addo Dankwa Akufo-Addo.

Clothed in an all-white overall apparel, popularly known as “Agbada”, he took the oath of allegiance and oath of office administered by the Chief Justice, Justice Georgina Theodora Wood.

He subsequently signed the oath book to confirm his dedication to the service of the country for the next four years.

Dr. Bawumia, a banker, economist and a former Deputy Governor of the Bank of Ghana, joined mainstream politics in 2012 as a running mate to the New Patriotic Party flagbearer, Nana Akufo-Addo.

In spite of their loss to the National Democratic Congress (NDC) candidate, John Mahama that year, the two again contested in the 2016 Presidential elections, where they won convincingly against the incumbent NDC candidate.

THE OATH OF ALLEGIANCE

THE OATH OF THE VICE-PRESIDENT

“I further (solemnly swear) (solemnly affirm) that should I at any time break this oath of office, I shall submit myself to the laws of the Republic of Ghana and suffer the penalty for it. (So help me God).”