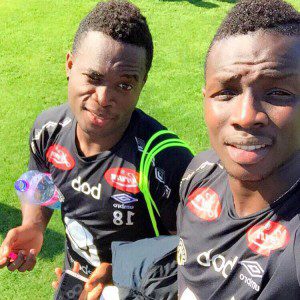 Otoo, 23, who future remains uncertain, was all smiles as he joined his teammates at their training base in the Gran Canaria in the Southeastern part of Tenerife.

The Ghana international has been strongly linked with a move away from the Norwegian Tippeligaen league with a number of English clubs believed to be interested.

The ex-Hearts of Oak skipper played an influential role for the side as they qualified back to the Norwegian top-flight last season.

The African raked in 13 goals in 26 appearances for the side.