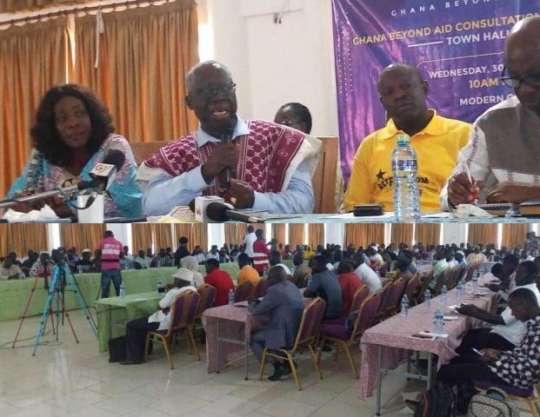 The Senior Minister, Mr Yaw Osafo-Maafo, has said the Ghana Beyond Aid (GBA) policy requires all citizens to nurture new mindsets, build and deepen partnerships to involve all key stakeholders through a non-partisan approach.

He said the country needed to build a national consensus on the direction of national development by resorting to concrete, unbiased, patriotic and honest discussions on the way forward in getting weaned off from over dependence on foreign aid to pursue its development agenda.

The Tamale meeting sets off the commencement of town hall meetings for public discourse on the Ghana Beyond Aid (GBA) policy with citizens in the Northern Region.

The meeting was to educate the citizens on the policy and also solicit and harness views and concerns on how to improve the policy and derive an acceptable and workable document for implementation.

The Ghana Beyond Aid is a national and non-partisan initiative of government, which aims at helping to ensure effective harnessing of the country’s resources and deploying them effectively and efficiently for rapid economic development and social transformation.

The Senior Minister said GBA is a vision of government to help develop better with a sustainable development agenda using the country’s own resources and reiterated that the policy required the involvement of all citizens to build and deepen partnerships by involving all stakeholders.

He urged the public to support the initiative to ensure that every government stayed committed to it.
He called for positive change in attitudes so as to help ensure a Wealthy, Inclusive, Sustainable, Empowered and Resilient (WISER) Ghana.

Mr Salifu Saeed, the Northern Regional Minister, assured the participants that the five regions in the north were largely peaceful and ready to support the GBA policy.

He urged all registered voters in the region to come out in their numbers to participate in the upcoming district level elections and referendum.