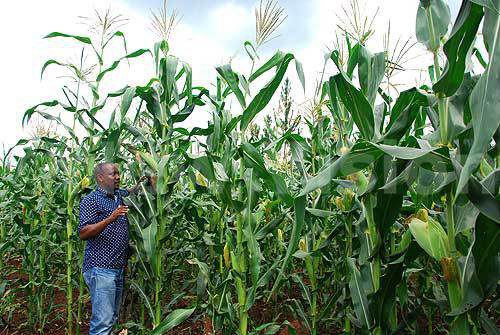 Kakooza on his maize plantation

Kakooza grows maize on his 65?acre land where he harvests over 190 tonnes every season.

?I earn sh1.5m from every acre per season. Almost everything I own comes from maize. Although I have other projects, this is one I have benefited from most; how can I quit?? he wonders.

Many maize farmers in Kayunga district have quit the enterprise complaining of fluctuating market prices, and low out comes.

Kakooza, who has been growing maize since 2006, involves his family in his work. He wonders how so many people migrate to urban centres complaining that there is no money in rural areas.

?When I hear people saying there is no money in farming, I just wonder. I spend between Sh100,000-Sh400,000 on an acre between preparing and harvesting period,? he says.

From the maize business, he has started many other projects on his farm and plans to purchase more land to grow even bigger.

However, it has not been a bed of roses for Kakooza who says the market is flooded with fake seeds and pesticides.

?It is a big challenge that we request the government to address urgently,? he says, adding that he is a victim of fake seeds and pesticides that are all over the market.

?I have had to travel to Kampala to get the right seeds and pesticides.?

According to him, fertilisers are becoming increasingly expensive, especially during harvest time.

?Few farmers can afford to wait like I do until when the market demand for maize is high.?

He encourages young people not to sell their land in villages to rush to urban centres because life in the city is expensive.

?I have seen many return from urban centres where they thought life was easy yet they sold their land when they were leaving; that?s why my company trains people on various issues.?

He also advises farmers in rural areas to participate in workshops to learn.