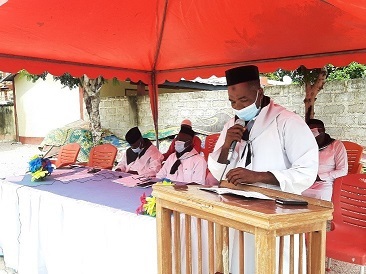 The Majlis Ansarullah wing of the Ahmadiyya Muslim Mission in the Upper East Region has held its annual zonal conference, ‘ijtimaa’ in Bolgatanga with a call on members to propagate healthy living by Almighty Allah.

The Majlis Ansarullah, which is the elders’ wing of the Mission, is made up of members who are 40 years and above.

Maulvi Mohammed Quaye, the Bolgatanga Zonal Missionary of the Ahmadiyya Muslim Mission, who made the call, urged members of the Mission to live exemplary lives according to the teachings of the Holy Prophet.

“We must live as manifestation of Islam. We should send the message of the good deeds and peace of Islam to each community or wherever we find ourselves as Muslims,” the Zonal Missionary said.

Maulvi Quaye made the call when he addressed the annual zonal ijtimaa in Bolgatanga which attracted members from various zones of the Mission across the Region.

The conference was on the theme; “The health of a Nasr.”
He urged members to exercise regularly and pay attention to their health needs as directed by the Holy Prophet, to live long and healthy to serve Almighty Allah, saying “He gave us one Hadees which says cleanliness is part of faith.

“We should take care of ourselves, participate in communal labour in order to keep ourselves clean, we should pray, for prayer can save the world in difficult times,” Maulvi Quaye admonished members.

Mr Hamid Abdul-Wahab Adam, the Upper East Zonal President of the Ansarullah wing of the Mission reiterated the need for them per their age to adopt healthy lifestyles to enable them stay strong and healthy to serve Almighty Allah.

He encouraged members to take advantage of Islamic gatherings to extend the message preached at the conference to members in their respective zones who could not attend the conference.

Mr Jaladeen Abdulai, the Upper East Regional President of the Ahmadiyya Muslim Mission explained that there were three divisions within the Ahmadiyya set up, “We have the women’s group known as the Lajna Imaillah
“We also have the young ones known as Majlis Khudam, and the elders group, from 40 years and above, also referred to as the Majlis Ansarullah,” he added.

He said the conference afforded them the opportunity to take stock of their activities and also educate their members on common health conditions that affected them at their age, to live healthy lifestyles, “At least, if we cannot do anything at all, within a week, just take a walk and exercise.”

The Regional President was hopeful that within the first or second quarter of 2022, leadership of the Mission in the Region would be able to complete and commission the ongoing Ahmadiyya Central Mosque project in Bolgatanga.

“We are concerned about the project, and until we see to its completion, we will not relent on our efforts,” Mr Abudulai, who is also the Upper East Regional Director of the Commission on Human Rights and Administrative Justice (CHRAJ) said.