European markets ended notably lower on Tuesday following a sell-off in shares of technology firms and several top name companies from other sectors due to concerns about valuation.

Also, despite optimism about economic recovery and some fairly upbeat earnings reports, the mood was cautious due to rising worries about a surge in coronavirus cases in several countries.

In the German market, Infineon Technologies tumbled nearly 6 per cent after it warned of continued bottlenecks in a manufacturing supply chain that is running at “full speed.” 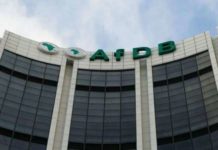