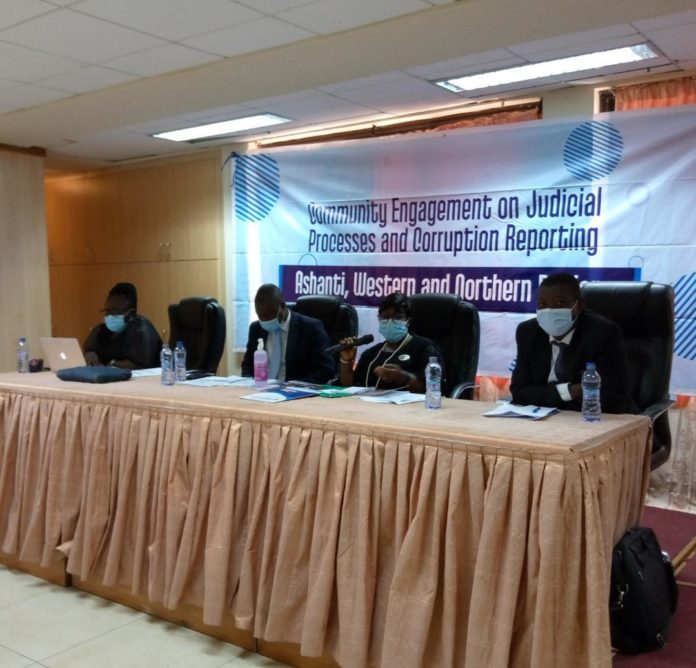 The GII said as part of efforts to make corruption reporting easier, many platforms such as the Advocacy and legal Advocacy Centre (ALAC), IPAIDABRIBE, and Eye on Corruption had been created.

Speaking during a community engagement programme dubbed; “Increasing Citizens Power to Fight Corruption: Contributions of the Judicial Service,” in Takoradi, Mr Michael Boadi, Corporate Affairs Manager of the GII, said Ghanaians must fully make use of such platforms to report corrupt practices and support institutions to work efficiently.

The meeting was attended by representatives of the Judicial Service, the Regional Coordinating Council, Commission on Human Rights and Administrative Justice (CHRAJ), Ghana Private Road Transport Union, and the media.

Mr Boadi said the ALAC, for instance, offered an avenue to report and pursue issues of corruption by providing legal advice and assistance to victims as well as witnesses of corruption, whereas the Eye on Corruption enabled people to submit corruption-related complaints through a mobile application.

He explained that the IPAIDABRIBE initiative also gave people the opportunity to report individuals or institutions that demanded bribes before offering services they were mandated to provide.

He said there were also call-in services, walk-in and online services, which had been introduced to aid decrease corruption.

Mr Boadi mentioned issues that could be reported to include bribery, extortion, blackmail, conflict of interest, embezzlement, diversion of public funds and land issues.

He said the COVID-19 era provided an opportunity for Ghanaians to increase their efforts in reporting corruption-related issues.

Mrs Linda Ofori-Kwarfo, the Executive Director of GII, stressed that reporting corrupt conducts and officials was the surest way to minimising the canker.

However, she noted that many Ghanaians were not seen at the forefront of reporting issues on corruption mainly due to fear of retribution and victimisation.

Justice Mrs Hannah Taylor, the Western and Western North Supervising High Court Judge, took participants through Judicial Set up and Processes and enlightened them on the jurisdictions of each court.

She said to control corruption in the Judicial Service, the National Anti-Corruption Plan and Public Relations and Complaint Unit (PRCU) had been established to receive complaints of biases or mishandling of issues by judges and other officials of the Service.

She said complaints at PRCU could be made in writing, via mail, or by filling a form.