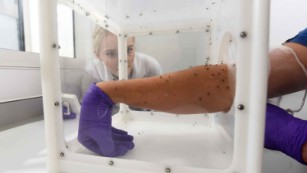 The Ho Municipality has recorded a decline in Malaria cases from 60,000 in 2015 to 49,000 in 2016, Dr. Senanu Kwesi Dzokoto, Municipal Director of the Ghana Health Service said on Tuesday.

He further revealed that under-five mortality rate in the Municipality had also dropped from 12 in 2015 to five in 2016 and said extensive education on the disease was helpful in reducing its prevalence.

Addressing a World Malaria Day celebration ceremony at Atikpui, a farming community on the Ghana-Togo border in Ho, organised by Hope For Future Generations (HFFG) a Non-Governmental Organisation in collaboration with the Ghana Health Service (GES), Dr. Dzokoto said environmental cleanliness would help prevent the disease, which was taking its toll on economic activities.

He said medical attention during the early stages of the disease could help reduce its mortality and charged communities to work hard to prevent malaria-related deaths.

She called for the patronage and correct usage of treated mosquito nets and added that the NGO was liaising with Zoomlion Ghana to disinfect selected communities.

The event brought together chiefs and people of Atikpui and its adjoining communities who were sensitised on malaria and its prevention.

A World Health Organization (WHO) report says estimated 2.2 million malaria cases were recorded worldwide in 2015, with a 21 per cent decrease in its incidence and a 29 per cent mortality rate.

It Is Unfair To Settle Sexual Abuse Cases Domestically – Queens