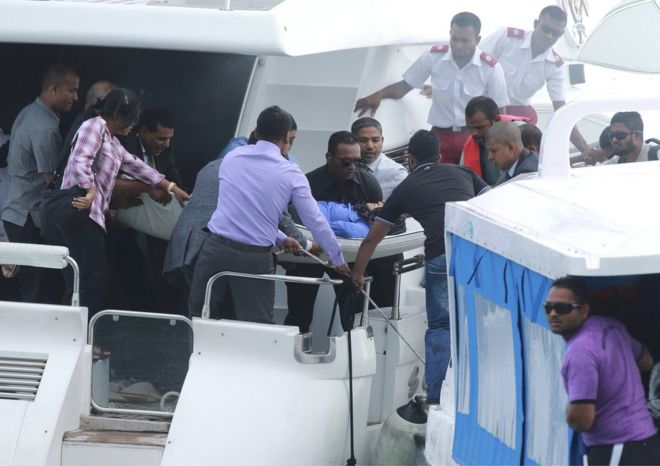 The Maldives? first lady Fathimath Ibrahim (centre) reportedly had minor injuries and was sent to a hospital

The cause was not immediately known.

Mr Yameen was uninjured but cabinet minister Mohamed Shareef told the BBC that the first lady, Fathimath Ibrahim, and two others were hurt by the ?relatively large blast?.

The explosion hit as the boat ferrying Mr Yameen and his entourage from the airport docked in the capital, Male.

Mr Shareef told the BBC that the blast could be heard ?many hundreds of feet away?.

Besides Ms Ibrahim, one of Mr Yameen?s security officials and one of Mr Shareef?s protocol staff were injured.

?(The police) have not ruled anything out yet. They?re doing a thorough investigation here locally and we?re not certain at the moment whether it?s an accident or a deliberate attempt on the president?s life,? he said.

Another Coup In Burkina Faso; Captain Ibrahim Traore Takes Over As President